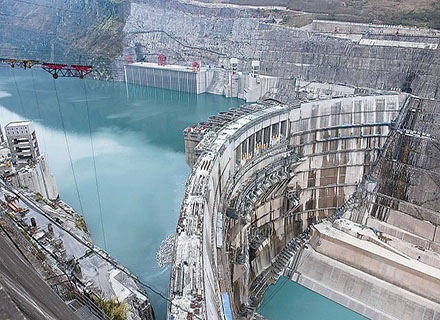 The Baihetan Hydropower Station in Southwest China has officially started operations of the first group of unique one million kilowatt generating units, according to the media. Baihetan is the world’s largest hydropower project under construction.

The Baihetan Hydropower Station is located downstream of the Jinsha River, an upper stretch of the Yangtze River, on the border of Southwest China’s Sichuan and Yunnan provinces. This super project is a new milestone in the development of hydroelectricity in the country by experts and officials.

Chen Jianlin, Chief Engineer of the Baihetan Hydropower Station, told the media, “It is a world-class project. Currently, there is no better station than it around the world. The construction works for Baihetan Dam began in 2017. Since then, it had to overcome technical problems, including fragile geology, hot and dry wind in the valley, and extensive excavation.

The project currently holds the record for the largest underground caverns, the largest anti-seismic parameters of a 300-meter high dam, and the largest spillway caverns. The unique record among them is one million kilowatts Chinese-developed generator, which is more than 50 meters high and weighs more than 8,000 tons, equivalent to the weight of the Eiffel Tower.

The Baihetan Hydropower Station is equipped with 16 generating units with an expected output of 62 billion kilowatt-hours per year. This can also reduce the carbon emissions of China by more than 51 million tonnes per year. The station will be fully operational by the end of 2022. The remaining 14 generators are planned to begin operations by July 2022.

International flights to resume in the last quarter of 2021: CAAV