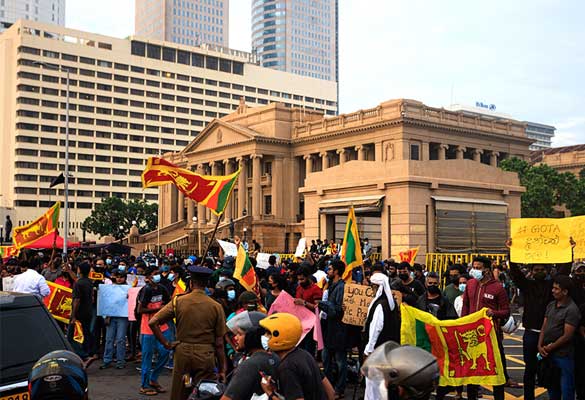 Following a high-voltage political drama in which Gotabaya Rajapaksa fled the nation and resigned as the President as a result of a popular uprising against his government for mismanaging the economy, acting President Ranil Wickremesinghe was chosen as Sri Lanka’s next President by Parliament.

In April, protests started in Sri Lanka’s capital Colombo and spread across the island nation. People in the country have been struggling with power cuts every day and shortages of basics such as medicines, food, and fuel. Adding more misery to the country’s problem, inflation is also running at more than 50%.

Petrol and diesel prices have also increased significantly as a result of the fuel shortage. For two weeks in late June, the Sri Lankan government outlawed the selling of petrol and diesel for non-essential cars. Fuel sales are still severely restricted. People have also been urged to work from home in order to save supplies, and schools have been shut.

What happens when a nation runs out of money?

Sri Lanka is unable to buy the goods it needs from abroad. And in May it failed to make an interest payment on its foreign debt for the first time in its history. Failure to pay debt interest can damage a country’s reputation with investors, making it harder for it to borrow the money it needs on international markets. This can further harm confidence in its currency and economy.

Sri Lanka is unable to import the goods it needs. Moreover, it missed its first-ever interest payment on its foreign debt in May. Failure to make debt interest payments can harm a nation’s reputation with investors, making it more difficult for it to borrow the funds it requires on global markets. The confidence in its currency and economy could be further harmed as a result of this.

What led to the Sri Lankan economic crisis?

COVID caused a drop in remittances and tourism, two significant sources of foreign exchange. An attempt to greenwash Sri Lanka’s intention to convert all of its agriculture to organic practices ultimately led to the collapse of the whole sector. The country’s economy quickly collapsed.

Alan Keenan, a senior consultant on Sri Lanka with the International Crisis Group, said, “Gotabaya was a very poor politician. He surrounded himself with charlatans… just barked orders at people. He was incapable of charming anyone, cutting deals, or changing course in time.”

Sri Lanka currently imports $3 billion (£2.3 billion) more annually than it exports, which is why it has run out of foreign currency. The country’s foreign exchange reserves, which were $7.6 billion (£5.8 billion) at the end of 2019, are now only about $250 million (£210 million).

With the island nation’s President, PM, Finance Minister, and dozens of top officials all from the Rajapaksa clan, there could only be family to direct the blame towards.

“The Rajapaksa brand is pretty much trashed for a long time, if not forever,” Keenan added.