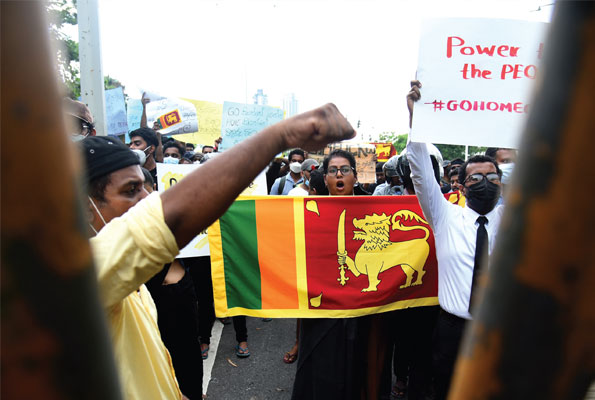 Sri Lanka is in the grip of a profound and historic economic depression, which has caused massive protests and forced its president to resign after absconding – but other nations may face similar difficulties, according to the chief of the International Monetary Fund (IMF).

“Countries with high levels of debt and limited policy options will confront significant challenges. As a warning sign, look no farther than Sri Lanka “Kristalina Georgieva, Managing Director of the IMF, said.

She also stated that developing countries have been facing significant capital outflows for four months in a row, putting their hopes of catching up with industrialized economies in jeopardy.
Due to a currency crisis, Sri Lanka is struggling to afford critical imports such as food, petrol, and medication for its 22 million people. Inflation has risen by almost 50%, with food costs increasing by 80% over the previous year. This year, the Sri Lankan rupee has lost value against the USD and other world’s leading currencies.

Many people accuse ex-President Gotabaya Rajapaksa of mismanaging the economy with terrible policies that were compounded by the pandemic.

Sri Lanka had amassed massive debt over the years, and this month it became the first nation in the Asia Pacific to default on foreign debt in 20 years.

Officials had been seeking a $3 billion (£2.5 billion) rescue with the IMF. However, those conversations are currently halted due to political turmoil.

Yet, the same global challenges are affecting other countries in the region – rising inflation and interest rate hikes, declining currencies, high levels of debt, and shrinking foreign currency reserves – afflict other economies in the region.

China has been a prominent creditor to many of these emerging countries and hence has significant influence over their fates. However, it is unknown what Beijing’s guidelines regarding lending have been or how the debt may be restructured.

According to Alan Keenan of the International Crisis Group, China’s responsibility is in sponsoring and financing costly infrastructure projects that have not yielded significant economic gains.

“Their aggressive political backing for the ruling Rajapaksa family and its policies has been equally significant… These political failings are at the heart of Sri Lanka’s economic collapse, and until they are addressed through constitutional reform and a pro-democratic political culture, the country will remain in a state of limbo.”

Distressingly, other nations seem to be following suit.

Laos
For some months, the portless East Asian republic of over 7.5 million people has risked defaulting on its foreign debt.

Now, rising oil costs as a result of Russia’s invasion of Ukraine have put additional strain on fuel supplies, driving up food costs in a region where an estimated one-third of the population lives in poverty.

Local news sites reported huge lineups for gasoline and that some homes are not able to pay their bills.

The kip, Laos’ currency, has fallen by over a third against the USD in 2022.

Laos, which is already significantly in debt, is finding it difficult to repay those debts or pay for imports such as fuel. According to the World Bank, the country has $1.3 billion in reserves as of December of last year.

However, its overall yearly external debt commitments remain around the same until 2025, comparable to roughly half of the country’s entire domestic revenue.

As a consequence, Moody’s Investor Services downgraded the communist-ruled country to “junk” status last month, a level at which debt is considered high risk.

In recent years, China has made large loans to Laos to construct large projects such as a hydroelectric plant and a railway. According to Laotian authorities speaking to the Chinese state news agency Xinhua, Beijing completed 813 projects worth more than $16 billion in just one year.

According to the World Bank, Laos’ public debt will amount to 88 percent of its GDP in 2021, with over half of that amount due to China.

Experts refer to years of corruption in the country, where a single party, the Lao People’s Revolutionary Party, has ruled since 1975.

However, Moody’s Analytics has identified rising trade with China and hydroelectricity exports as encouraging factors. In a recent analysis, economist Heron Lim stated, “Laos has a fighting chance of escaping the danger zone and the need for a bailout.”

Pakistan
Fuel costs in Pakistan have risen by about 90% since the end of May when the government discontinued fuel subsidies. It is attempting to cut spending while negotiating with the IMF to continue a rescue program.

The economy is tanking as the cost of commodities rises. The annual inflation rate reached 21.3 percent in June, the highest level in 13 years.

Pakistan, like Sri Lanka and Laos, has poor forex reserves, which have nearly halved since August last year.

It has placed a 10% tax on large-scale businesses for one year to earn $1.93 billion to close the gap between government revenue and expenditure, which is one of the IMF’s primary requests.
“If they can access these resources, other global lenders like Saudi Arabia and the UAE [United Arab Emirates] may be keen to lend loans,” S&P Global Ratings sovereign analyst Andrew Wood told the BBC.

Former Prime Minister Imran Khan, who promised to address some of these issues, was deposed, albeit the economy was not the sole cause.

In June, a senior minister in Pakistan’s government advised citizens to consume less tea to minimize the country’s import bills.

Again, China plays its part, with Pakistan owing Beijing more than a fifth of its debt.

“Pakistan seems to have renewed a commercial loan arrangement with China, increasing its foreign exchange reserves, and there are indications that they will reach out to China in the second part of this year,” Wood continued.

Maldives
In recent years, the Maldives’ national debt has risen to well above 100 percent of its GDP. The pandemic devastated an economy that was strongly reliant on tourism, as it did in Sri Lanka.
Countries that rely heavily on tourism generally have higher public debt ratios, but the World Bank says the island country is especially vulnerable to increasing fuel costs due to its undiversified economy.

According to JPMorgan, the holiday resort is at risk of failing to repay loans by the end of 2023.

Bangladesh
In Bangladesh, inflation reached an 8-year high of 7.42 percent in May.

With reserves running low, the government has moved quickly to limit non-essential imports, lowering laws to draw remittances from millions of migrants living abroad, and restricting foreign trips for officials.

“Bangladesh has been forced to re-prioritize government spending and set limitations on consumer activity,” he said.

Soaring energy and food prices are endangering the world economy, which has been devastated by the pandemic. Now, emerging countries that have borrowed excessively for years are discovering that their shaky foundations render them highly susceptible to global shockwaves.

Argentina
The sovereign default world record holder appears certain to increase its tally. The peso is currently trading at about a 50% discount in the illicit market, reserves are dangerously low, and bonds are trading at only 20 cents on the dollar – below half of how they were after the country’s 2020 debt restructuring.
The government does not have any significant debt to service until 2024, but it increases after that, raising concerns that strong Vice President Cristina Fernandez de Kirchner may attempt to renege on the IMF.

Ukraine
According to Morgan Stanley and Amundi, Russia’s incursion implies Ukraine will almost probably have to restructure its $20 billion in debt.
The deadline for bond payments of $1.2 billion is in September. Kyiv may be able to pay thanks to aiding funds and reserves. However, with state-run Naftogaz requesting a two-year debt freeze this week, investors believe the government will soon follow.

Tunisia
Africa has a slew of IMF applicants, but Tunisia appears to be the most vulnerable. A close 10% budget deficit, one of the world’s highest public sector salary bills, and concerns that getting, or at least adhering to, an IMF program will be difficult due to President Kais Saied’s effort to extend his hold on power and the country’s powerful, obstinate labour union.
Tunisian bond spreads – the premium investors demand to acquire debt rather than US bonds – have climbed to almost 2,800 basis points, and it is one of Morgan Stanley’s top three likely defaulters, along with Ukraine and El Salvador. “An agreement with the IMF becomes vital,” Tunisia’s central bank chief, Marouan Abbasi, said.

Egypt
Egypt has a debt-to-GDP ratio of about 95% and has had one of the largest outflows of international currency this year, totaling $11 billion, according to JPMorgan. FIM Partners forecasts that Egypt will have to pay $100 billion in hard currency debt over the next five years, including a $3.3 billion bond in 2024.
Cairo devalued the pound by 15% in March and requested the IMF for assistance, but bond spreads are now above 1,200 basis points, and credit default swaps (CDS), an investor tool for risk management, pricing in a 55% likelihood of payment failure.

What America can learn from its past bouts of inflation

How the war will disrupt global supply chains