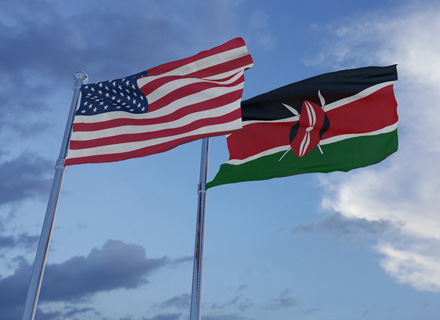 Talks between the US and Kenya with regard to a free trade deal is underway. On March 17, the Trump-led administration notified Congress that it would begin trade agreement negotiations with the Sub-Saharan country. The administration announced its intent to start bilateral trade agreement negotiations with Kenya in the month of February, when Kenyan President Uhuru Kenyatta visited the white house. According to the US President Donald Trump, the new bilateral free trade agreement with Kenya would replace the 20-year-old African Growth and Opportunity Act (AGOA), which expires in 2025. However, the news of the trade deal was not well received among other African nations. Members of the African Continental Free Trade Agreement (AfCFTA) and East African Community (EAC) criticised the agreement as well as Kenya for negotiating alone with the US.

So far Kenya has decided to overlook the regional tension the new trade agreement with the US would create for a much greater prize- access to the US market. Even though Kenya already gains access to the US market through the African Growth and Opportunity Act, the benefits are limited to tariffs which can be unilaterally revoked. Lack of reciprocal liberalisation commitments in these programmes reduces their potential to drive domestic reforms that promote more efficient use of resources in the beneficiary country, limiting the expansion of its exports, and misses the opportunity to signal commitment to an open, business-friendly environment. These are benefits Kenya does not get from a preferential programme.

Two-way trade in goods between the United States and Kenya amounted to over $1 billion in 2019, putting Kenya in the United States’ top one hundred trading partners. The United States is Kenya’s third-largest export market and its seventh-largest source of imports. With Kenya’s economy growing at an average 5.6 percent for the past five years, and its leadership position as the trade heart of East Africa widely recognized, there is significant potential to expand the relationship.

Recent developments in Kenya’s free trade agreement
Trade talks with Kenya was announced during a White House visit by Kenyan President Uhuru Kenyatta in early February. It would be the United States’ first free trade agreement (FTA) with a sub-Saharan African country and its second on the continent, after the 2006 FTA with Morocco. After formally notifying the congress that the two countries have begun negotiations on the proposed trade deal in March, the US government has asked American and Kenyan firms to share their views on the proposed free trade agreement as it lays grounds for the pact. The deadline for the submission of written comments is April 28, after which the US Trade Policy Staff Committee (TPSC) will hold a public hearing in Washington DC.

While Kenyan firms have particularly been supportive of the trade deal despite the possibility of stiff competition, two Kenyan lawyers have moved to court seeking to have Kenya’s Free Trade Agreement (FTA) with the United States revoked. They have accused President Uhuru Kenyatta’s administration of violating the East African Community (EAC) Treaty and its protocols.

What does the free trade agreement mean for Kenya?
The planned agreement with Kenya, meanwhile, is a first for the US trade relations in sub-Saharan Africa and signifies a shift from multilateral trade deals. Even though it is unclear what are the benefits that Kenya will receive from the free trade agreement, it is expected to add the benefits the Sub-Saharan country receive from the African Growth and Opportunity Act. Kenya is one of AGOA’s top five exporters to the United States, primarily sending apparel, cocoa, tree nuts, coffee, and tea. It imports American aircraft, machinery, agricultural products, and plastics. While the African Growth and Opportunity Act gives about 40 African states tariff-free access to the US for 6,500 products, the new free trade agreement could potentially let Kenya send more goods to the US market and also bring exclusivity for some products which the AGOA doesn’t provide. While the existing AGOA provides the African countries preferential treatment selling into the US, it does not offer any reciprocity. With the new free trade agreement, Kenya will definitely aim to change that.

Agriculture is also part of Kenyatta’s major agenda for the country’s economic development growth. Through the new trade agreement, Kenyatta will look to attract huge US investment in Kenya’s agricultural sector including Kenya-based agritech startups. Furthermore, US agricultural companies are poised to increase various investments in Kenyan agriculture. According to Scott Eisner, president of the US-Africa Business Center at the US Chamber of Commerce, the free trade agreement would see the US bringing its precision-agriculture technology to the country. He told the media, “There’s a huge potential here for American companies to have a big impact and big inputs into the agricultural sector throughout the Kenyan market. I do see this as a big upside and a big win down the road for U.S. agricultural inputs into the Kenyan supply chain.”
Reportedly, the US exported $37 million in agricultural products to Kenya in 2018. That consisted of corn, wheat, pulses, vegetable oils and planting seeds. Kenya, on the other hand, exported $154 million worth of agricultural products to the US, of which tree nuts accounted for roughly 50 percent of total sales. Coffee, tea, essential oils and vegetable oils also were among the top products that Kenya sent to the US. As Kenya maintains high tariffs on agricultural exports, the new trade agreement would also look to bring in a change to the tariffs maintained by Kenya.
For Kenya, the free trade agreement will also mean greater openness to US investment, intellectual property protections, and domestic pro-market reforms. For the US, the free trade agreement will open the doors for further similar trade deals in the future, which will allow the nation to counter China’s growing investment in the region.

The US identifies Kenya’s geostrategic significance
While there are more than 50 countries in the continent of Africa, the question arises why did the US choose to sign the free trade agreement with Kenya and not Nigeria or South Africa. The decision to sign a free trade agreement with Kenya by the US seems to have been based on a combination of geostrategic significance and Kenya’s resolve and ability to strike a deal in the first place, more than its economical capability. In January 2018, US Trade Representative Robert Lighthizer told the media, “I think that before very long we’re going to pick out an African country, properly selected, and enter into a free trade agreement with that country, and then that, if done properly, will become a model for these other countries.”

Also, under the Generalised System of Preferences (GSP), a separate trade preference program, UN-listed Least Developed Countries (LDC) receive additional access to export goods duty-free to the United States. Though GSP excludes some of Kenya’s top exports such as textiles and apparel, products covered by AGOA, many of Kenya’s agricultural exports would be duty-free if it were an LDC country. However, since Kenya isn’t included in that list, the expiry of the AGOA would put Kenya at a greater risk than neighboring countries, should AGOA expire without a replacement.

According to experts, US officials see a trade agreement with Kenya primarily through a geopolitical lens and as a means to combat China’s strong influence in Africa.’ Over the years China has significantly increased its investment in different sectors throughout Africa. Given the US is in a trade war with China, it makes sense for the US to have the African continent and its emerging economies as its allies. Another reason for the US to enter into a free trade agreement with Kenya is security. Kenya is a key ally in the campaign against the Somalia militant group al Shabaab.

Implications of the US-Kenya free trade agreement
In March 2018, after years of negotiations, 54 African countries united to sign the African Continental Free Trade Area (AfCFTA) agreement. The agreement entered into force for 29 of those countries, which includes Kenya, in May 2019. On July 1, 2020, the AfCFTA will take full effect. Also, African heads of state agreed in 2018 that no country should negotiate a bilateral free-trade agreement with a third party once the continental bloc comes into force. The free trade agreement with the US is a violation of the agreement. Also, with the announcement of the US-Kenya free trade agreement, AfCFTA members are concerned that the US attempt to use Kenya as a “model” will not reflect the needs of other members and could upset regional integration, intra-Africa trade and also peace and unity in the region. With regard to the US-Kenya free trade agreement, former deputy chairperson of the African Union Commission and the first secretary-general of the Common Market for Eastern and Southern Africa Erastus Mwencha remarked, “Under the AU, the African heads of state have discouraged member States from entering into bilateral free trade negotiations with third parties because they jeopardize the AfCFTA.” He also argues that the deal would put Kenya in a far better position to negotiate a better deal compared to other African nations.
Negotiations for AfCFTA has lasted for years. Finally in 2019, all members nations were on the same page as they emphasised on the necessity to open up their economy to each other and boost intra-African trade. However, the US-Kenya free trade agreement will make it difficult to make the full implementation of the AfCFTA a reality. If Kenya lower barriers for US exporters while other countries in Africa do not, those partners will amend regulations to determine the origin of imports and it will prevent transshipment of American goods through Kenya. Even the US will similarly insist on rules of origin that prevent exports from such countries from passing through Kenya on their way to the US. That will mean border checks have to remain in place to enforce the rules of origin, which is against the very idea of the AfCFTA. It will in fact raise the costs of intra-trade in Africa.

Takeaways from the US-Morocco bilateral trade agreement
Both the US and Morocco signed a bilateral trade agreement on June 15, 2004, following the signing of the USMFTA Implementation Act on August 17, 2004 by then US President George Bush. The agreement aims at increasing trade and creating new investment opportunities between the two countries. For Morocco, the trade agreement was an opportunity to access the US market and for increased investments into Morocco.
But initially, Morocco faced various challenges. When it comes to textiles, the Morocco-US rules of origin were similar to the North American Free Trade Agreement (NAFTA)’s which required Mexican textile firms to use inputs from the US next door. But due to geographical constraints, it was not feasible to establish a supply chain by keeping costs in check.

Also, Americans demand expeditious delivery of finished goods. Here too, distance to market proved formidable. Moroccans quickly learned their lessons. They established the Moroccan American Centre for Policy, a non-profit, principally to inform US opinion makers, government officials, and the public about political and economic developments in Morocco and its strategic position in North Africa as a launching pad to the EU and sub-Saharan Africa.
It will be interesting to see if Kenya learns from the US-Morocco deal and how Kenya deals with the violations it is creating being a member of the AfCFTA and the economical benefits it gets from the free trade agreement with the US.

How Vietnam is revolutionising solar power

CURRENT
ISSUEAmid climate change concerns, global fossil fuel use acceleratesGlobal temperatures could rise by more than 3°C and the world economy could shrink by 18% in the next 30 years…