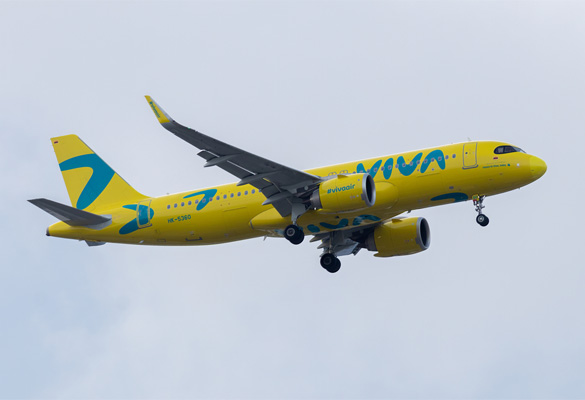 Viva Colombia, the low-cost airline will start flying to Argentina after the airline received authorisation to launch a few routes between both the countries where they will connect Medellín with Buenos Aires and Cordoba, according to media reports. The airline requested permission to fly its feet to Argentina earlier this year and the low-cost airline is expanding its presence in the international market by using the Medellin International Airport as a low-cost connecting hub.

Viva Colombia also filed permission with the Colombian Civil Aviation National Authority when they were looking for authorisation to fly from Medellin to Buenos Aires and Cordoba. The distance between Medellin and Buenos Aires is 3,027 miles, while Medellin and Cordoba are closer, 2,682 miles. It has also been reported that Viva Colombia will use its Airbus A320ceo and neo fleet to connect these two countries.

The airline has also filed permission to operate one daily flight on both routes and according to media reports, Viva’s filing has been approved but the airline is yet to announce it officially. Experts have also estimated that the two new routes would increase Viva’s international connectivity by nearly 30 percent. Additionally, the airline is also planning to launch more routes from Medellin to other South American countries.

Felix Antelo, Viva’s CEO told the media, “The routes from Medellin to Argentina are part of a route pool that we’ve evaluated under the scope of our great project ‘Hub Medellín.’ This project puts Medellin as a privileged city to reach the whole American continent as the main connection hub. Additionally, these are just two of the nearly 15 routes we’re planning for the next three years.”