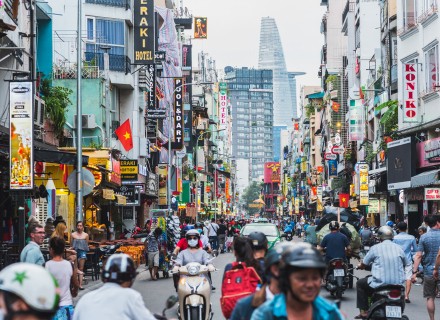 Vietnam has the potential to become the world’s 19th largest economy as its economy is expected to grow five times, media reports said.

It is reported that the country currently is the 37th largest economy. Furthermore, steady and consistent growth will assist Vietnam to surpass major Asian economies such as Thailand and Taiwan by 2035. The reports are produced by the U.K consultancy the Centre for Economics and Business Research (CEBR).

Vietnam’s GDP is expected to grow 7 percent in the next five years and 6.6 percent in the subsequent decade. Furthermore, the country aims to achieve a 6.5 percent GDP growth this year, higher than the planned target of 6 percent.

The report indicates that the country’s nominal GDP will worth $1.59 trillion by 2035 from the current $341 billion, marking a five-fold surge in 15 years. Vietnam’s economy, unlike most of the economies successfully escaped from a contraction last year due to government initiative which prevented a possible economic slump due to the pandemic. The economy surged 2.91 percent last year.

Vietnam’s government is expected to carryout its duty to enhance the country’s economic model, ramp up productivity, and bolster economic competitiveness based on science, technology and innovation.

The county has witnessed rapid development in recent years due to a improvement in the tourism, agriculture and few other segments.

It is reported that China will surpass the US as the world’s biggest economy by 2015 after outperforming its counterpart during the pandemic.