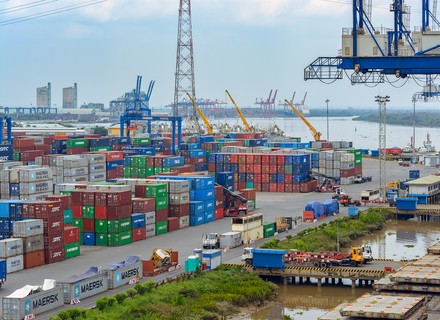 It is reported that volume at Lach Huyen port surged 661,071 TEU from 418,558 TEU, while the container volume at Cai Mep port surged to 4.41m TEU, up from 3.74m in 2019. Lach Huyen is a public private in Japan and Vietnam. In January, the joint venture between Vietnam’s Gemadept and CMA CGM, Gemalik embarked operations at Cai Mep.

The Vietnamese government has stated that the country’s port operations are mired by the lack of a large international standard port while the small port’s lack proper infrastructure. Vietnam had ramped up berths to 588 berths in 34 ports, as of 2020 beginning, marking a rapid growth in the span of 20 years.

It is reported that the government will currently focus on the development of the Hai Phong and Cai Mep ports in accordance with international standards. The government mulls investing fresh capital into central economic zones as it seeks to bolster efforts towards port’s development and set up cluster’s accommodation for large container ships.

According to experts, the Vietnamese port segment is poised to grow this year as trade in goods is expected to boom on the back of rebound in domestic consumption, export markets and production.

The pandemic has walloped the port segment of many global economies; however, Vietnam has managed to stay resilient.

Wizz Air establishes new base in Bosnia and Herzegovina

Revolut applies for banking license in the UK