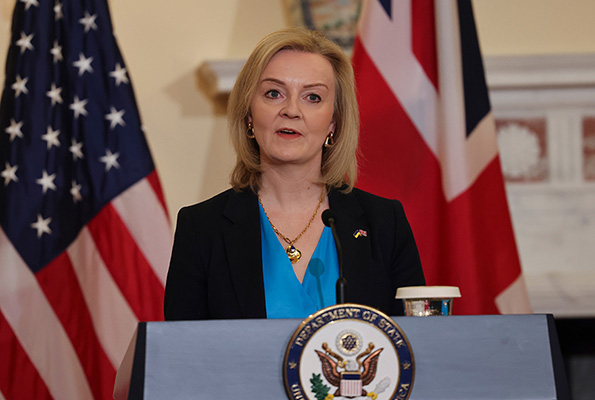 With data showing that private sector activity declined last month as businesses struggled with rising prices, Liz Truss will take over as prime minister of the UK with the economy on the verge of recession.

According to the most recent assessment from S&P Global and the Chartered Institute of Procurement and Supply (Cips), manufacturing output decreased “severely and rapidly” in August, while the UK’s leading service sector also experienced reduced activity.

The monthly business survey, which the government and the Bank of England constantly monitor for early warning signs from the economy, revealed increased concerns over skyrocketing inflation and a notable decline in firm confidence.

According to the S&P Global and the CIPS monthly health check, business cost pressures have continued at exceptionally high levels. They are connected to rising energy and fuel prices as Russia’s war in Ukraine pushes up costs on the wholesale market. Businesses do not gain from an energy price cap, in contrast to households.

The British economy is dealing with a “deteriorating labour market and persistently elevated price pressures linked to the soaring cost of energy,” according to Chris Williamson, the chief business economist at S&P Global Market Intelligence. As a result, “the incoming prime minister will be dealing with an economy that is facing a heightened risk of recession.”

The S&P/Cips’ monthly purchasing managers’ index decreased from 52.1 in July to 49.6 in August. Any reading over 50 denotes increased activity in the private sector.

Separate data from the retail sector revealed a slowing in sales growth last month as consumers tightened their budgets.

The British Retail Consortium (BRC) said that total sales increased by 1% annually in August, down from 2.3% in July, as a result of consumers holding off on purchasing white goods and other expensive items and sluggish clothing purchases as summer activities came to an end.

The incoming prime minister must provide immediate support for families and businesses, according to Helen Dickinson, CEO of the BRC.

She added that households and retailers are getting ready for a challenging period ahead, with some forecasts predicting that inflation may approach 20% in the new year.

Last month’s warm weather encouraged consumers to spend more money on certain things, such as suntan lotion, while food and beverage sales for summer barbecues increased by 5% from a year earlier.

But according to analysts, shops must prepare for a decline in demand from financially strapped customers.

“Worryingly, August statistics show a large dip in clothes sales – the area which has been the most solid performer this year,” said Don Williams, a retail partner at the accounting company KPMG. “This could herald the start of shoppers pulling back from non-essential spending.”

The results were released as some economists predicted Britain’s economy would enter a recession this summer as families cut expenses due to the rising cost of living.

The Bank of England predicts that inflation will reach its highest point since the early 1980s, exceeding 13% and that a protracted recession will begin in the fourth quarter of this year.

According to Goldman Sachs economists, if the current high wholesale energy prices are maintained throughout the new year, inflation might reach around 22%, exceeding the postwar record established in 1975.

Following her victory over Rishi Sunak in the contest for the Conservative leadership, Truss promised to “offer an ambitious strategy to slash taxes and boost the economy” as well as “deal with people’s energy bills” in the run-up to a brutal winter for both homes and companies.

Growth is being hampered, according to economists, by issues like Brexit, sky-high inflation, and a chronic staffing shortage. In addition, the S&P and CIPS snapshots showed that consumer-facing services, including dining out, lodging, travel, and leisure activities, were experiencing collapsed demand, with households experiencing the most significant drop in living standards since the 1950s.

“Port interruptions, Brexit paperwork, and shortages all continue to play a part in boosting inflation, and the sector is virtually powerless in the face of ever-rising energy costs,” said John Glen, the head economist at the Cips.

This week, the service sector will closely watch the incoming prime minister as they look for a policy-driven response to the cost crisis.