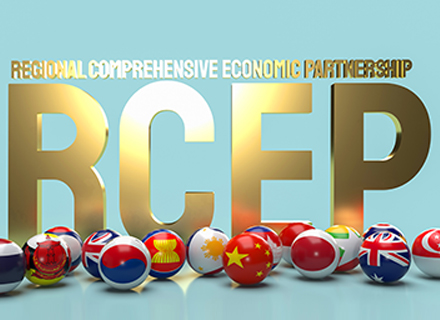 The deal has taken nearly a decade to be formulated following numerous meetings and discussions among leaders and diplomats from the Association of Southeast Asian Nations members. Finally, the leaders penned the deal on November 15, 2020. The trading bloc created by the Asian nations will be the largest in the world by both population and economic size. It will account for 30 percent of the world’s population, which is around 2.2 billion, and 30 percent of global GDP. What is appealing about the trading bloc is that it is even bigger than the European Union and the US–Mexico–Canada Agreement.

RCEP negotiations got underway in May 2013, originally involving 16 East Asian countries which include the 10 members of the Association of Southeast Asian Nations, plus China, Japan, Korea, Australia, New Zealand, and India (the six countries with which ASEAN had existing free trade deals). India, however, pulled out in the end largely due to political pressure and organised rallies against the deal. Many in India fear that the trade deal would open the Indian markets to Chinese consumer products and agricultural goods from Australia and New Zealand, which in turn might harm local producers and sellers in the market. Nevertheless, there is hope that India might reunite and rejoin the pack if its demands are met, which includes safeguard mechanisms among others. Despite India’s withdrawal, the 15-nation RCEP is still poised to be the world’s largest mega-free trade agreement.

Why is the trade deal so significant?
The RCEP framework is based on existing trade agreements signed by the ASEAN and it effectively combines them into a single agreement that also includes Australia, China, Japan, New Zealand, and South Korea. This makes RCEP the first trade agreement between China, Japan and South Korea—the three of the largest economies in Asia—and one of the first multilateral trade agreements signed by China. According to a research report, RCEP will strengthen the supply chain synchronisation among the regional members that has been disrupted by the recent Covid-19 pandemic and China-US decoupling; additionally, it will speed up the labour intensive sector’s supply chain relocation from China to ASEAN countries.
India was initially part of the RCEP, but it has since pulled out. But the opportunity for the country to rejoin still stands. The deal covers roughly one-third of the world’s population and just under one-third of the global GDP. The Brookings Institute estimates that the deal will increase global GDP by $500 billion in the next 10 years, but estimates vary widely as with all trade deals. Most analysts agree that the RCEP has the potential to add more than $100 billion to national incomes within the trading bloc. Many experts also predict the deal will increase the market size of Asia Pacific. The deal will create additional opportunities for Asian companies to produce and sell within the region. The RCEP is indeed a milestone for regional economic integration and post-pandemic economic recovery for member countries.

Why did India pull out of the deal?
Despite being involved in year-long negotiations, on November 4, 2019, India decided to exit discussions mainly due to political pressure from opposition and different stakeholders. According to a government official, India raised various concerns throughout the period of negotiations; however, those concerns were not addressed during the time of negotiations. The Indian government felt it was important to prioritise the interests of its industries like agriculture and dairy and to give an advantage to the country’s services sector. India feared that the elimination of tariffs would open its markets to imports, which in turn could harm local producers.

Indian Prime Minister Narendra Modi said during a RCEP Summit in Bangkok that the present form of the RCEP agreement does not fully reflect the basic spirit and the agreed guiding principles of RCEP. It also does not satisfactorily address India’s outstanding issues and concerns. In such a situation, it is not possible for India to join the RCEP agreement. Prior to the exit, India suggested remedial measures imposing some kind of barriers, if imports rise a particular threshold, however, the other members did not agree. The other member nations have, however, maintained that India is welcome to rejoin the pact at any point of time in the future. Singapore Prime Minister Lee Hsein Loong even said that it joined the trade pact with the hope that India will be able to come on board eventually.

While India was still part of the negotiations, there was an uproar in the country among oppositions and different stakeholders that local producers would not be able to compete with their counterparts, especially in the agricultural and dairy sector. Indian producers, many of whom are still rural based, and do not possess advanced technologies that are available in the global market, will face pressures from both high-end producers from countries such as Australia and New Zealand. Experts also believe that India’s metal producers would become vulnerable from greater competition.
Escalating tensions and border disputes with China was another major reason for India’s decision to not sign the agreement. India wanted to reduce its exposure to China and not let its product flood the Indian market. It has also feared that there were inadequate protections when it comes to a surge in imports, and even argued that there should be a possible circumvention of rules of origin. It has feared that third countries could dump their products by routing them through a country that enjoys lower tariffs. India’s trade deficit with RCEP nations stood at $105 billion, while trade deficit with China alone stood at $53.5 billion.

The cost of not joining the RCEP
While many economists and analysts believe that India made the right decision to not join the pact, Chinese media states that the decision was a strategic blunder. However, the issue is complicated from India’s point of view. While it could have gained in terms of welfare improvement for consumers, there were also risks of the domestic market flooded with foreign products, which would harm local producers. It seems like India has decided to focus more on the disruption of local producers over welfare improvement of consumers. Some critics argue that the protection and promotion of domestic industry or producers should not be a major concern. This would ultimately harm the country as a whole in the long term.

While India did some kind of temporary relief in the form of restrictions or rather limitations, its concerns were not addressed by other members of the pact. What the country wanted to ensure amid the negotiations was countermeasures such as an auto-trigger mechanism to raise tariffs on products when their imports crossed a certain threshold. At the same time, India also wanted RCEP to exclude most-favoured nation (MFN) obligations from the investment chapter as it did not want China to enjoy the same benefits it was giving to other strategic allies. India felt the agreement would force it to extend benefits given to other countries for sensitive sectors like defence to all RCEP members. If India would have remained in the pact, global trade would have also increased. Given its huge population and market size, the pact members understand the potential it holds and thus has left the door open.

A geopolitical win for China
RCEP was a significant geopolitical win for China, a big diplomatic success. It shows that China can pursue its aggressive political and economic policies without cost and that the world cannot unlink itself from the Chinese market. Tighter integration will thus bring the region closer into China’s economic orbit. In December, local media reported that China will accelerate the implementation of trade liberalisation measures promised under the RCEP deal. China will exert its influence being the largest economy in the region, on regulations and standards setting within the bloc.

According to Morgan Stanley’s chief China economist Robin Xing, RCEP may help accelerate negotiations on other trade deals such as the China-Japan-South Korea free trade agreement and a China-European Union bilateral investment treaty.

The impact of RCEP on the rest of the world
From a global viewpoint, the RCEP could be understood as a free trade agreement between three Asian manufacturing giants- China, Japan and the Republic of Korea. However, the trade pact should not be a major source of concern for the European Union (EU). The direct economic impact of the RCEP on other countries or pacts are rather small in nature, however, they are not negligible.

The implementation period of such deals are also unusually long, sometimes extending to 20 years. Customs and other types of trade-enhancing regulatory reform provisions will help accelerate the region’s integration, but the deal will do little to free trade in services, where only selected sectors will benefit. What would really worry the EU is displacement of its exports to RCEP members due to the preference margins accorded to the other signatories.
The EU has important trade agreements with major Asian superpowers such as China and Japan and they are unlikely to be displaced. However, of the EU’s total exports to RCEP in 2019, most are not covered by trade agreements, including to China. It is noteworthy that China is the EU’s second largest export destination, where the applied trade-weighted tariff was 9.15 percent in 2017.

The geopolitical factors associated with the RCEP deal should also be a source of concern for the EU as well as the US. Despite a trade war with the US, China’s trade and foreign direct investment (FDI) continued to thrive. The RCEP signifies the failed attempt by the Trump Administration to isolate China and to sever it from global value chains. Countries which are part of the RCEP pact such as Australia, New Zealand, South Korea and Japan are US allies. Them joining the RCEP means they simply cannot sever their economic ties with China and the role it plays in the region. Despite being allies of the US, it is hard for them to ignore the fact that China’s manufacturing sector is today almost twice as big as that of the US.

Newly elected US President Biden has promised to be tough on China, but his policies are still unclear in dealing with China or the other Asian countries. Economists expect the Biden administration to resurrect the TPP in the shape of a modified CPTPP. What is very clear is that Biden will not adopt the same policies or strategies adopted by his predecessor Donald Trump. The RCEP deal shows that Donald Trump’s approach has proved to be insignificant in dealing with China.

A breakthrough initiative in climate change