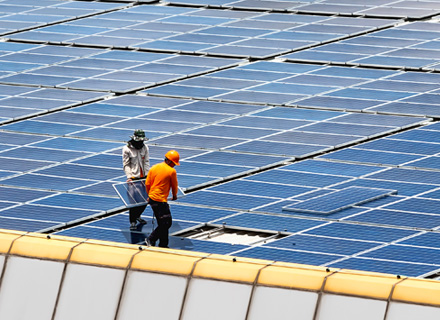 According to the Asean Centre for Energy, Thailand’s energy demand is predicted to increase by 80 percent in the next two decades while the country is steadily exhausting its traditional energy sources. Two years ago, the Thailand’s Ministry of Energy released a revised Power Development Plan with the intention to generate a significant proportion of the country’s energy from renewable projects.

The International Renewable Energy Agency published a report on renewable energy outlook for Thailand which noted that the country’s oil and gas resources will deplete over the next decade on the back of increasing demand. It appears that Thailand has a few years left before oil or natural gas is fully exhausted. So, the potential risks from the persistent fossil fuel crisis have forced the country to diversify the national energy mix.

Thailand’s energy import and consumption has been quite high over the years. The country imports 60 percent of energy for commercial use, which also includes 80 percent of total domestic oil each year.
Against this background, the Department of Alternative Energy Development and Efficiency (DEDE) and the Ministry of Energy prepared the Alternative Energy Development Plan (AEDP). The AEDP 2012-2021 was focused on increasing the country’s power consumption from alternative energy to 25 percent and decreasing the dependence on energy import. Also, the DEDE has been implementing the AEDP 2015-2036 which promotes the use of domestic fuel to lower crude oil imports. In a nutshell, the AEDP will help to make the country’s energy security robust and increase power generation from renewable sources.

Chinese involvement in Solar market
Solar and biomass are expected to become more popular as Thailand seeks to diversify its energy mix. In particular, solar is important to the country because its power capacity increased tenfold from 2012 to 2017, according to the International Renewable Energy Agency. It is reported that Thailand will have solar power in abundance, in fact more than all of the Southeast Asian countries combined. One reason is because the solar power sector is receiving significant amounts of investment to make further advancements in Thailand’s energy sector.

Last year, Fitch Solutions found that Chinese solar manufacturers have been increasing in number in Thailand and they are introducing sophisticated solar equipment across the Thai market. This can be attributed to the fact that Thailand’s climatic conditions are capable of producing high solar radiation levels. Fitch forecasted solar capacity to become twice as much during the period between 2018 and 2028, from 3 gigawatts to more than 6.7 gigawatts.

That is because the country has a lot of solar potential sitting around waiting to be capitalised. The proposed solar farms will be built across nine of EGAT’s hydroelectric dam reservoirs by 2037 and cuts the allure of the 1.3 gigawatts of generation installed globally as of October 2018. It is reported that other proposed projects are much bigger than the existing world’s largest floating system.

EGAT’s hydro-floating solar project will push Thailand to the forefront of Southeast Asia’s solar energy infrastructure. The project is quite versatile in its mechanism and can generate power continuously to support the system’s peak demand. It will combine hydropower from the dams to generate power to meet high demand. However, in case the dams are carrying limited water, the solar cells will facilitate power generation from sunlight during the day and use hydropower to support power demand during the night.

Although the project is found to be more expensive than the ground-mounted panels, it will support Thailand’s vision of energy stability, prosperity and sustainability.

An important highlight of the project is that there will be no impact on the society, community and environment. The company will install High Density Polyethylene (HDPE) floating devices which are not hazardous to the environment or aquatic animals. The company will continue to implement similar projects in other EGAT dams.

French oil giant Total plans to develop solar rooftops with 25 megawatt capacity in Thailand. Its affiliate Total Solar Distributed Generation has signed a binding agreement with one of the country’s largest food companies Betagro to build solar rooftops for its 24 facilities. The project will be equipped with more than 62,000 solar panels with a capacity to generate approximately 38 gigawatt per hour of renewable electricity each year.

Bioenergy rises as a substitute for oil
Bioenergy is also a Thai energy option in its renewable energy drive. Currently, biomass, biowaste, and biogas represent a significant portion of the country’s energy mix. Thailand has the largest share of bioenergy compared to all Asean states for industrial and transportation purposes.

The Alternative Energy Development and Efficiency Department predicts Thailand to generate 8,800 megawatt from bioenergy by 2021.In particular, biomass has always been important to rural Thailand for many years. Five years ago, biomass accounted for 5,990 kilotonne of oil equivalent to heat for an industry, producing more than 60 percent of the country’s renewable energy consumption. Thailand’s abundant biomass resources and the Thai government’s past efforts in developing bioenergy have made it significantly important to the region.

Biofuels in Thailand are anticipated to take over 44 percent of oil consumption by 2021. Essentially, the Thai government is seeking to quadruple biofuel production to 253 million litres of biodiesel and bioethanol per day by 2036, accounting for 25 percent of renewable fuel demand in the future.

The study found that tapioca starch plants were largely used for electricity generation from biogas. Each year, there is 80 million tonnes of agricultural waste from sugarcane, corn, cassava, rubber and rice among others. Mainly, small and medium scale industries are major consumers of bioenergy in the country. For transportation, Thailand has the biggest share of liquid biofuels in the Asean region. Therefore, its potential to generate bioenergy to substitute oil consumption and promote power generation from renewable energy cannot be overlooked.

Government steps up waste to energy conversion efforts
Waste-to-energy management has become an integral part of the national agenda to push renewable energy and reduce waste pollution in the country.

The Thai government’s national power development plan (PDP) for the period between 2018 and 2037 is focused on promoting investor interest to drive waste-to-energy power projects. The PDP has set a goal to generate 500 megawatts from bioenergy, contributing to the country’s long-term target of 30 percent of total energy consumption from renewable resources by 2037.

The PDP aims to increase the country’s renewable energy to 18 percent, which is equivalent to 20,757 MW by 2037. That said, solar energy generated by the private sector is expected to reach 10,000 MW.

The country’s Pollution Control Department predicts average solid waste to reach 42,900 in 2023 from 40,662 tonnes per day in 2008. It seems that more than 50 percent of the waste goes to landfills for over four decades now. These landfills are found to be in highly-populated areas such as Bangkok. The Thai government is seeking to reduce landfill waste by using waste-to-energy for power generation.

Tech and new business models critical to renewables drive
Thailand is preparing to deploy sophisticated technologies to transform its electric grid on the back of rising renewable energy. Its power generation capacity from renewable sources will be fed into the national grid. This includes solar power generating 15, 574 megawatt and biomass producing 5,786 megawatt among other renewable sources.

Technology innovation is key to Thailand achieving its renewable energy targets . For example, machine learning can be deployed to observe and predict the process from supply of renewable energy to feeding it into the grid.

Blockchain technology is also considered for peer-to-peer trading of energy. Last year, the Thai government conducted a pilot project on 100 MW of household solar rooftops. On the first day, the pilot project installed solar rooftops on 70 households generating a power capacity of 393.11 under Thailand’s AEDP 2018.

Another approach the country is taking is to liberalise businesses in renewable energy. In terms of developing new business models for energy usage, the country plans to allow businesses to compete with the two state-owned suppliers. In fact, EGAT in collaboration with Metropolitan Electricity Authority (MEA) and Provincial Electricity Authority (PEA) is investing $19.65 million annually to research new business avenues. Thailand is heading in the right direction to achieve its renewable energy target with market incentives, plans and structures in place. However, it is of utmost importance that the Thai government seeks active involvement of all stakeholders in formation of renewable energy policies, frameworks and pilot programmes.

A grand fortune for China’s healthcare