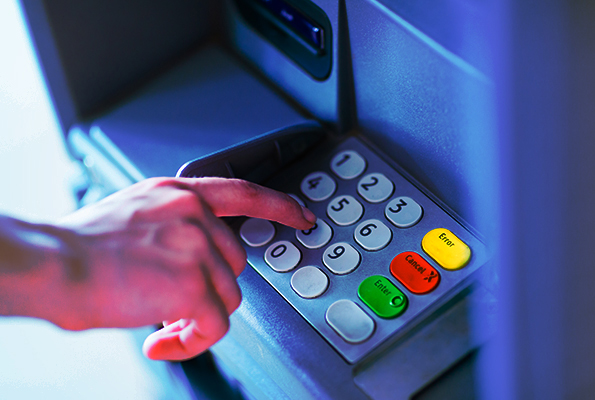 A September 2022 data of ‘The Ascent’ said that the reports of identity theft grew significantly in 2021, with nearly 1.7 million people impacted by the phenomenon. While Credit card fraud declined slightly in the same year, some 390 million people still reported the fraud to the Federal Trade Commission.

And yes, credit cards remained the most preferred medium for these criminals. Frauds in this particular arena constituted the second-highest identity theft cases in 2021. From 2017 to 2019, credit card data theft incidents steadily rose. From 2018 to 2019, these particular incidents increased by 72%, from 2019 to 2020, the same figure was around 45% and in 2021, these crimes decreased by 1%.

Now ATMs help in withdrawing funds, checking balances, and conducting other quick transactions, and since they are backed by computing devices and software, they can very much be targeted by hackers, leading to more data breaches and data thefts.

Post-COVID, apart from the increase in online/digital banking, ATM use is becoming frequent as well. So safety is more paramount here, as the threat actors are upping their game. Here are some tips that will be helpful.

Be Mindful Of The Location
Location awareness is key here. If you are using an ATM in a densely populated area makes sense, in terms of safety. Also, avoid ATMs at spots such as poorly-lit street corners. Another advisable solution will be to use your own bank’s ATM as much as possible. You have to visit your bank branches too often, but the benefit of this lies in the fact that those places are monitored by security cameras.

Another potential target for cybercriminals is free-standing ATMs, which can be found in grocery stores or shopping malls. Hackers can put skimming devices in these kinds of ATMs and steal your card data. These skimming devices can record cardholders’ PIN numbers, using which a fake debit/credit card can be easily created.

Check The Machine Before Using It
Sometimes it may not be possible to visit your bank branch and use the ATM there. You may be at locations far away from your home and there comes the urge of withdrawing money.

In that case, you have no other option but to use ATMs of other banks or independent ones. In that case, check the device thoroughly to find out if everything is fine. Wobbly keypads or on-screen messages giving different instructions than the normal ATMs are the red flags that the device may have been tampered with by cybercriminals already.

Look Out For People’s Behaviour
Try to avoid ATMs, where anyone can easily walk or drive up. If someone is lingering outside the kiosk without having a credit/debit card in his/her hand and asks you to let in, don’t do that.

In a packed ATM, try to keep a safe distance between you and the other users, so that they cannot see your PIN number, as you type that credential on the device’s keypad. Also, don’t write the PIN on your card’s back.

Try to observe the behavior of people hanging around the machine and kiosk too much. If you are using drive-thru ATMs, lock your car doors, and keep the engine running. Also, keep the other windows closed except the one used by you to access the machine. Don’t exit the vehicle.

Cut Short Your Stay Time & Follow Instincts
Before visiting the ATM, prepare a list of things to do there and get them registered in your mind. The purpose of this exercise is to make sure that you spend very less time inside the kiosk.

For depositing money, prepare the envelope at home. After taking out the cash from the ATM, don’t count the notes, while standing near the machine.

Also, keep track of your receipts. For every transaction, get one such receipt from the machine and then double-check it against your bank account statement. This act will help you to find out any discrepancy or potential fraud, in case you have used an ATM other than your bank’s one.

If your instincts tell you something is wrong in the ATM, be it the transaction or a random individual having suspicious movement around the kiosk, just exit the place. Also, take the police help as well.

Ways To Deal With Card Theft
If you lose your credit/debit card, report it to the bank immediately. Also asks them to block the card, so that it can’t be misused.

While opening your bank account, you can opt for a credit card instead of a debit one, since the former offers greater liability protection.

And yes, after applying for the new card, it will take as many as 10 days to arrive. In case you need an expedited delivery, be prepared to pay a fee for that. The bank, in the meantime, will investigate the matter and issue a provisional credit for the ‘fraudulent transactions’.

Also, check your accounts online and see whether you have received the refund for the fraudulent transactions made between the credit card theft and report it to the bank.

Talking about charges from the bank’s side, reporting the incident before any fraudulent charge made from the stolen card will ensure that the affected customer won’t have to pay liability costs at all. If he/she reports the incident within two days of the theft, the person will be liable for up to USD 50. For a reporting time of fewer than 60 calendar days from the incident, the cost goes up to USD 500.

Once the 60-day period lapses, the customer will be liable for the entire amount stolen, including money taken from other accounts linked to the bank card.