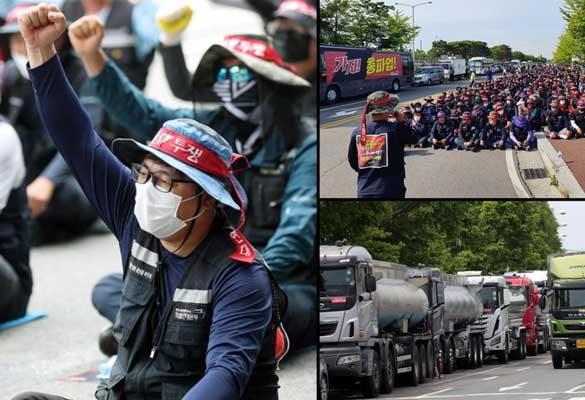 Several truckers who have been carrying out strikes for the past one week in South Korea are threatening to disrupt the global supply chain after industry executives warned that computer chip production in Asia would be disrupted.

The group is protesting the rising fuel prices and wants a guaranteed minimum salary. Despite four rounds of negotiations with the government, no agreement has been reached yet.

With the global flow of commodities hampered by obstacles such as Chinese lockdowns and the crisis in Ukraine, the first clear sign that the strike was impacting South Korea’s world-leading semiconductor sector came on June 14.

According to the Korea International Trade Association (KITA), a Korean company that manufactures isopropyl alcohol (IPA), a raw chemical used to clean chip wafers, is having trouble exporting to a Chinese company that then sells wafers to chip manufacturers.

It has also stated that due to this almost 90 tonnes or about one week’s shipment has been delayed.

The walkout has already cost the South Korean manufacturing sector about $1.2 billion in lost production and unfulfilled deliveries.

The truckers’ union has made it clear that they will continue its strike. At the same time, they condemned the transport ministry for not cooperating with them.

The Cargo Truckers Solidarity organization stated that due to component shortages caused by the strike, production at Hyundai’s largest plant complex was halved last week.

According to Josh Brazil, vice president of supply chain at the logistics company Project44, delays at Busan port were skyrocketing as containers faced increasing delays getting in and out of the port.