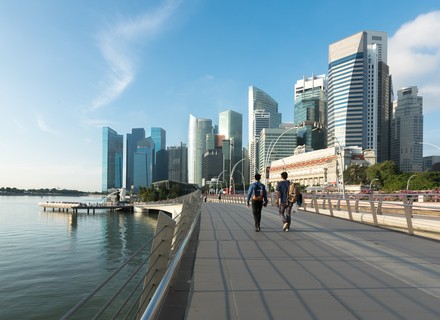 The Singaporean economy is expected to rebound slowly after it was battered due to the COVID-19 pandemic. The country went into recession due to the pandemic although contraction moderated in Q4.

It is reported that sectors such as transport hub and finance were walloped due to the pandemic induced lockdown, global flight restrictions and sluggish global economy. Furthermore, Singapore’s economy recorded a 5.8 percent slump last year. However, the figure is slightly less than an earlier forecast of a slump between 6.5 percent and 6 percent. The government expects that the economy will grow 4 percent to 6 percent this year.

The government embarked on its COVID-19 inoculation programme despite sealing borders and has also relaxed most of the Covid-19 rules and regulations and is eager to improve the economy with a global vaccine rollout. Indonesia largely depends on travel and trade to run the economy.

The country’s GDP contracted 3.8 percent in October-December on a year-on-year basis as compared to a 5.6 percent slump in Q3. It is reported that experts earlier expected a 4.5 percent slump in the Indonesian economy.

The GDP surged 2.1 percent on a quarter-on-quarter seasonally adjusted basis in October-December compared to an 9.5 percent expansion in Q3.

Barclays regional economist Brian Tan, told the media, “Recovery going forward in 2021 will probably continue to be quite gradual. And a lot of it will depend on the speed at which the government can distribute the COVID vaccines and whether or not this can allow us to reopen the borders more quickly.”

Cambodia gears up to produce its first oil with KrisEnergy