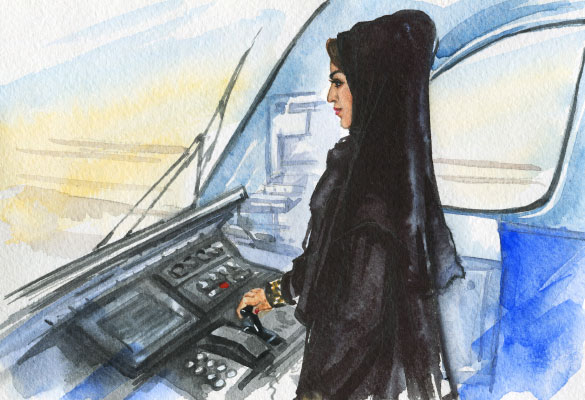 As many as 28,000 Saudi women have jumped in the fray after a train operator listed 30 open positions of women drivers for bullet trains running between the two holy cities of Mecca and Medina.

This meant for every opening there were more than 930 applicants. Service operator Renfe, a Spanish corporation, said that the applications would be processed based on online scrutiny of the candidates’ academic qualifications and their proficiency and they have already eliminated half of them.

The selection process is expected to be complete by the end of the month. This drive to hire women by the rail operator comes as Saudi Arabian authorities announced relaxations of restrictions surrounding the employment of women in most sectors. These relaxations are part of Saudi Crown Prince Mohammed bin Salman’s Vision 2030 plan to broaden the country’s economy.

Until recently, women were restricted to teaching or roles in the healthcare segment. According to reports, these relaxations have resulted in female workforce participation rising to a significant one-third of the total labour market. This rise in women’s participation has also come in categories that were dominated by migrant workers.

A Brookings report noted that in 2018, Saudi women who had a job or were actively looking for one accounted for 19.7% of the adult female population. This meant a dramatic increase in female labour force participation by 64% in just two years. The study found that the age group that noted the most growth was the 40-54 category. Most of the job growth was observed in the private sector with the government employment of women increased by a mere 5% in the same two-year period.

Further, the study also revealed that contrary to some fears, the participation of women did not harm the prospects of men. According to a statement by the Minister of Human Resources and Social Development (MHRSD) Eng. Ahmad Sulaiman Al-Rajhi, 400,000 new jobs were created in 2021 alone in the country.

Harnessing the right technology is key to being a model workplace