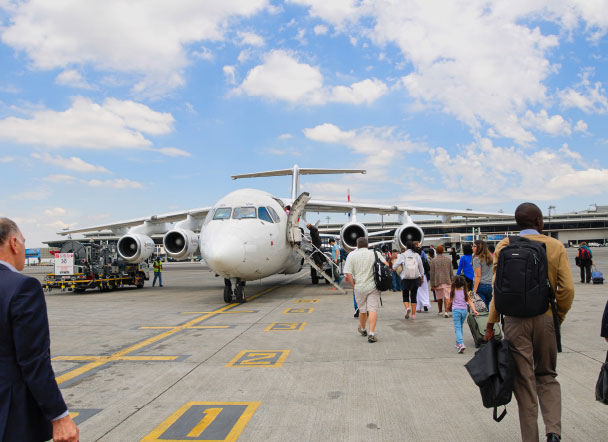 State-owned carrier South African Airways is finally solvent and liquid. On December 5th, 2019, the carrier entered business rescue, a form of bankruptcy protection where the control of the company is taken over by an administrator. Les Matuson and Siviwe Dongwana were appointed as the Business Rescue Practitioners of South Africa Airways. It entered business rescue to maximise the odds of survival and achieve a good return for its creditors. The coronavirus pandemic, which has battered the aviation industry worldwide only added to the woes of the troubled carrier. After 17 long months, the carrier announced that it has finally emerged from business rescue and administrators finally handed over operations back to its board and executive team. The administrators also reduced the carrier’s debt balance from $2.6 billion to $193 million.

South African Airways has been plagued by financial difficulties and mismanagement and was on the verge of bankruptcy at a point of time. According to the carrier, it has not made any profits since 2011. South African President Cyril Ramaphosa told at the Financial Times Africa Summit in London, “South African Airways is one of those state-owned enterprises that has relied on lots of state bailouts. We are on record as saying we are open to the participation of the private sector. As we speak now, we’re talking to a few interested parties when it comes to South African Airways.”

South African Airways was established in 1934 after the South African apartheid government acquired Union Airways. Its primary purpose was to connect South Africa to the outside world during a time when the country was isolated because of Apartheid sanctions. Fast forward to 2017, the carrier announced it would reduce its fleet by 23 percent to deal with the increasing debt and losses. Given its poor books, banks started refusing to forward loans to the beleaguered carrier. Standard Chartered was the first bank to call out its loan followed by the likes of Citi Group which refused to extend its loan facility to the carrier. On May 2, 2020, South African Airways ceased all operations after being in service for 86 years. The carrier also laid off most of its employees.

SAA needs to return to the sky

In the month of October last year, the government announced that it is seeking investors that can help to bail out the airline. During the same month, the South African government bailed the carrier out with R10.5 billion in order to implement the turnaround strategy. This resulted in the carrier returning 4 Airbus A319s, all of its 10 A320s, all of its 6 A330-200s, 4 A330-300s, 3 A340-300s, 3 A340-600s, and all 4 new A350-900s to their respective lessors. Currently, South African Airways’ fleet consists of just under a dozen planes, including some A319s and A340s. However, the carrier is finally solvent as is seeking help.

It is not going to be easy to attract investors to the project. It is a difficult task, given how the carrier was managed over the years. With the carrier’s poor track record, it is very difficult to see why investors would want to come in and put their money on it. Even though the administrators have handed over operations back to its board and executive team, there are many issues that still need resolving, as clearing payments owed to previous employees.
In its quest to survive, the carrier had cut almost 80 percent of its workforce and reduced its liabilities to $177 million after deals with creditors and lessors. As the world is still in the middle of a pandemic and global air traffic is expected to remain depressed for years, it’s very unlikely that the carrier will return to the sky soon.
Ethiopian Airlines, another state-owned African carrier seemed to be interested in South African Airways. Last year, it was reported by media houses that Ethiopian Airlines has shown interest in South African Airways (SAA) as the embattled state-owned carrier has opened up to the possibility of outside investment. Ethiopian Airlines has offered to loan aircraft and pilots to the South African carrier. However, there has not been much development.

SAA is ready to fly but needs help

As long as the pandemic continues, finding investors to help South African Airways get back to the sky is going to be difficult. South African Finance Minister Tito Mboweni agreed to free up R10.5 billion last year, but even he remains skeptical when it comes to the future of the carrier. The biggest challenge in front of the South African government is funding because the carrier will still incur losses during the first three to five years. This means state support is a must. The government must continue to release funding for South African Airways, which many feel is a burden to state finance.

While the government is keen on finding a private-sector partner for South African Airways, it seemed an impossible task given current condition of the aviation sector, domestic and global. However, Public Enterprises Minister Pravin Gordhan did reveal that there are three potential candidates who have been identified by the government.
It was reported recently that South Africa’s Department of Public Enterprises revealed that South African Airways was in the final stage of negotiations with an investor. This could be a significant boost for the carrier in its quest to return to the skies of Africa. While it is still unclear, who the potential investor is, the recent development could possibly open up a new chapter for the carrier. While the last couple of years, it has been only gloomy news when it comes to the carrier, this is indeed a positive development.

As a part of the process to resume operations and return to the skies of Africa once again, South African Airways is also restructuring its top hierarchy. The change began at the top as the carrier has named Thomas Kgokolo as the new interim chief executive officer. He is South African Airways’ third interim chief in three years and will make him the fifth CEO to take office in the last five years.

Thomas Kgokolo, who has replaced outgoing CEO Zukisa Ramasia, is a certified chartered accountant. Kgokolo has made a name for himself with his stellar performance in the public sector in South Africa. With over 15 years of public sector experience and more than 10 years of experience at a non-executive director level, his main role as the new interim CEO of South African Airways will be to oversee a smooth transition out of the airline’s business rescue proceedings. Under Kgokolo, the carrier will seek investors and partners and prepare to re-enter the African aviation market.

However, South Africa is still the largest aviation market on the continent. Its domestic market is big and is a popular destination for tourism. Addis Ababa, the capital of Ethiopia and where Ethiopian Airlines is based, on the other hand, is more of a transfer hub. This could be one reason for Ethiopian Airlines’ interest in the South African carrier.

The success of Ethiopian Airlines can be attributed to the clarity of vision and independence from the government in day-to-day operations, the very factors which were lacking when it comes to South African Airways. Over the years, Ethiopian Airlines has been so efficient that it achieved its Vision 2025 targets in 2018 itself. It tells quite a lot about the carrier and how well managed it is. Ethiopian Airlines is further helped by competent leadership and well-trained staff.

Ethiopia’s geographical location also allows the carrier to operate as a hub connecting Africa with the Middle East, Asia, and Europe. Addis Ababa now attracts and transfers much more traffic from Asia to the American continents. However, much of the credit for its stellar success goes towards the government policies that enabled a coordinated aviation sector while allowing the airways to focus on commercial operations on a day-to-day basis. Over the years, the carrier has also partnered with other African airlines to create a feeder network serving their hub in Addis Ababa.

Another contrasting distinction between Ethiopian and South African Airways is that the Ethiopian government has provided protection to its own airline. It is extremely difficult for other carriers to get landing rights in Addis Ababa.

The aviation sector is one of the worst affected sectors by the Covid-19 pandemic. Last year, many countries across the globe introduced lockdown measures and sealed borders to curb the spread of the virus. This forced carriers to ground their flights and cancel operations for many months. It took a heavy toll on most of the carriers in Africa as well as in other parts of the world. Even though restrictions were lifted during the second half of 2020, many destinations to Europe, or Asia-Pacific were still not operational. Also, there was a significant drop in passenger demand and according to many experts, it will take another couple of years for normalcy to return.

While it is difficult to assume whether the fate of South African Airways would have been different if there was no pandemic. The carrier was bound to collapse at some point in time. Mostly Covid-19 expedited the process. Another notable African carrier Kenya Airways also trimmed its operations significantly due to the pandemic. Namibia’s national carrier Air Namibia filed for bankruptcy as a result of the pandemic after being operational for over 70 years. Another South African carrier Mango Airlines is also facing bankruptcy after running out of money and is looking up to the state to bail it out.

According to a report by the International Air Transport Association (IATA) published in March 2020, airlines in Africa lost around $4.4 billion in revenue till then, due to the Covid-19 pandemic. Another report in November said that the global aviation sector could see a net loss of $118.5 billion in 2020 and around $38.7 billion in 2021.
Passenger demand also dropped to almost half in Africa. Around 54 million passengers flew by plane within Africa in 2020, a more than 50 percent drop when compared to the previous year. According to figures from the African Airlines Association (AFRAA), African carrier’s turnover declined by around $8 billion.

In its report, IATA also said, “African airlines have also received little government support and there have been a number of failures. The relative lack of cold chain facilities in the region may delay the distribution of vaccines and this region is expected to experience a delayed recovery in financial performance.”

Many experts predict 2021 to also be a challenging year for the African aviation industry. Four African carriers so far have ceased operations due to the impact of the Covid-19 pandemic, while two others are in voluntary administration. “In absolute numbers, the region is expected to see around 45 million travelers in 2020 rising to 70 million travelers in 2021. A full return to 2019 levels (155 million travelers) is not expected until late 2023,” IATA said.

In its November report, former IATA director general and CEO, Alexandre de Juniac, said, “The numbers couldn’t get much worse. But there is a way forward. With the continued financial support of governments to keep airlines financially viable and the use of Covid-19 testing to enable travel without quarantine, we have a plan to overcome the worst immediately. In a longer-term the progress on vaccines is encouraging. Most importantly, people have not lost their desire to travel.

“The market response to even small measures to lift quarantine is immediate and strong. Where barriers have been removed and travel rebounded. The thirst for the freedom to fly has not been overcome by the crisis. There is every reason for optimism when governments use testing to open borders. And we need to make that happen fast.”

VAT in Oman and its economic implications

Covid-19 and its effects on the aviation industry