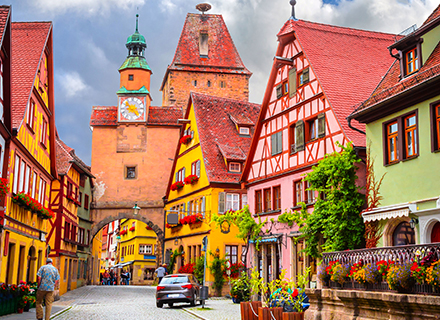 As the Covid-19 crisis takes a toll on most of the industries worldwide, the real estate sector in Germany emerges as gold, according to British investment manager M&G. Many developed countries in Europe and in the rest of the world are witnessing increasing home prices amid the coronavirus pandemic. According to Switzerland-based banking giant UBS, prices rose in eight out of 10 high-and middle-income countries during the second quarter of the year, with prices in the US rising by 5 percent a year earlier and in Germany by 11 percent.

However, the crisis has impacted real estate markets differently. The rapid spread of the coronavirus across countries in the world has resulted in governments introducing strong countermeasures such as social distancing rules, lockdowns and containment measures, which have led to a sharp decline in GDP rates across Europe, to an extent never seen since 1945. That said, the housing markets in Europe are expected to face a sluggish recovery after months of lockdowns to curb the spread of the coronavirus, and in turn has brought sales to a standstill.

Many German investors expected the coronavirus pandemic to cause slack in Germany’s property market. According to a survey published by consulting firm Ernst & Young (EY), around 76 percent of real estate companies in Germany expected a declining transaction volume this year, while the figure was only 16 percent at the end of 2019. Also, during that time, only four percent of real estate companies expected an increasing transaction volume. The survey carried out by EY took into account 300 participants across the real estate industry in Germany.

Germany real estate sector shines amid crisis
Despite the Covid-19 crisis and the economic meltdown, the real estate market in Germany is not as volatile compared to real estate markets in England or Spain. Due to this, experts believe investors will jump into the market since the residential market in Germany is significantly stable. Richard Gwilliam, head of property research at M&G Real Estate believes the impact differs based on the countermeasures introduced by the government of the region to deal with the virus.

The difference in government policy approaches has manifested itself in various ways in terms of economic hits, he said. Speaking about Germany’s real estate market, he said that the industry is holding up remarkably well and investments have actually grown this year compared to last year. According to him, this is not surprising as the real estate fundamentals in Germany have been pretty solid for years with vacancy rates as low as 2 percent in Munich and 3 percent in Berlin. “Even if businesses had to think differently about how they use real estate, it hasn’t really stopped them from showing they do want to occupy real estate in Germany. Rents have continued to grow,” he said.

Gwilliam also cited Germany’s economic backdrop as a reason for the German real estate sector’s strong performance. Amid the crisis, Germany had a much more solid fiscal position than other countries in Europe. In this regard, M&G head of investment strategy Jose Pellicer said that the German economy is driven by the manufacturing sector, whereas economies such as Spain and France are more service oriented, with much greater dependency on the tourism and hospitality sector. While the tourism and hospitality sector was battered by the pandemic, the manufacturing sector comparatively incurred much lesser damage.

Home prices continue to accelerate
The coronavirus pandemic has not dampened the German real estate market as previously expected, with residential property prices in the country having continued to rise—both in the city and in the countryside.

If we look at the average purchasing price for apartments in Germany in the second quarter of 2020, they were around €2,921 per square metre, compared to just €1,500 per square metre back in 2012. Among all the major cities in Germany, Munich has proved to be the most expensive when it comes to buying properties, with real estate prices rising 6.1 percent since the third quarter of 2019. In the third quarter of 2020, prices for new apartments in Frankfurt averaged €7,200 per sq metre, which is up 8 percent from the same quarter of 2019. Since 2014, apartment prices have been growing around 10 percent annually, according to the property company JLL.

When it comes to the demand in the market, it remains strong, for reasons attributed to low interest rates, urbanisation, and financial soundness of most German citizens. The European migration crisis has also helped in sustaining the demand for residential properties in major cities across Germany. Residential construction activities also continue to rise despite the pandemic, which came as a shock to many. During the first half of this year, dwelling permits increased by 8.2 percent year-on-year to 157,103 units, following a 1 percent growth in 2019, data from the German Federal Statistical Office revealed.

It is important to note that residential property prices were rising when the German economy plunged deeper into recession, with real GDP shrinking by a whopping 10.1 percent in the first quarter of 2020 when compared to the previous quarter. It was also the biggest quarterly drop ever recorded by Germany since it started publishing quarterly GDP calculations back in the 1970s. Overall, the German economy is expected to shrink by 6.3 percent this year after recording a growth rate of 0.6 percent in the previous year. As a result of the pandemic, Germany’s unemployment rate stood at 4.2 percent in the second quarter of 2020, up from 3.8 percent in the previous quarter. However, it was still lower than the EU’s average jobless rate of 7.1 percent.

Spain’s property prices to be Europe’s biggest drop
Contrary to the German real estate market, the Spanish real estate market is expected to see the biggest price drop across Europe, according to various experts. While all of them agree that there will be a drop in prices, they can’t seem to agree over just how sharp this price reduction will be, in case of one. US-based credit rating agency S&P predicts that Spain will record higher prices fall among other European countries due to the pandemic. According to the credit rating agency, the fall in property prices in Spain this year will be 1.4 percent, the second steepest decline after Ireland, which is forecasted to drop by 1.6 percent.
So, while prices of residential properties are expected to rise in Europe’s biggest economies amid the pandemic, Spain on the other hand, will record a decline in prices. Even the IMF in its October report said that the Spanish economy will be among the most affected of all major economies globally. It is also important to note that the impact of the coronavirus crisis on Spain’s real estate is nowhere close to the impact of the 2008 financial crisis. In 2014, during the height of the financial crisis, properties were sold at a 35 percent lesser value than the average in 2008.

However, S&P also predicts that prices will rise in Spain at a rate of 1.8 percent next year, in line with the rapid increases predicted for Germany for that period. By 2022, S&P expects a rise of 4.5 percent, when it comes to Spain’s residential houses market. Only Ireland and Portugal are expected to record a higher growth rate than Spain in 2022.

In short, within a period of one year, residential property prices in Spain will experience one of the biggest price fluctuations among the European countries, starting from a drop of 1.4 percent in 2020 to a 4.5 percent rise in 2022. Besides S&P, Bankinter predicts a 9 percent drop between 2020 and 2021. Similarly, consulting firm Forcadell and the University of Barcelona are forecasting a drop of 16 percent in 2021. The property markets in Ireland, Portugal and the Netherlands are also expected to record similar price fluctuations. According to S&P, in France and the UK, residential property prices will increase by around 1.5 percent in 2020. In Italy, they are expected to rise by 0.5 percent, in Belgium by 1.8 percent, while in Germany and the Netherlands the upswing will be around 4. 5percent and 6 percent.

Blockchain for the win
Major German real estate group Vonovia is using blockchain to transfer ownership of real estate rights. It has issued a 20 million euro bond using the Stellar blockchain to issue security tokens for the transfer of real estate rights. The company’s move into bond digitisation comes after German regulators officially legalised issuance of digitised securities last year. It is reported that Stellar network has enjoyed popularity in recent months.

According to one of the reports by Natixis, residential properties are expected to be more resilient across Europe, followed by offices and retail. The report forecasts that residential property prices would drop by around 5 percent by the end of this year. Natixis conducted a study about the impact of the Covid-19 crisis on real estate valuations in the form of an econometric exercise, with a focus on four main European markets which are Germany, France, Spain and Italy.

To deal with the ill effects of the pandemic on the economy and on various other sectors, including real estate, governments across Europe have introduced their own policies to deal with it. For example, countries such as Germany, UK and France have suspended evictions. While some countries such as Italy and the UK are providing temporary mortgage relief to their citizens. Governments in many European countries have also asked their banks to give relief to their customers.

Similarly, in many cities across Europe, tenants are being offered mortgages and rent holidays. Not only this. France and Italy have also suspended construction until further notice. The impact of the coronavirus pandemic varies across all real estate sectors in Europe. To understand the true impact, we must study each and every sector differently and with many further details, which is a gigantic task given there are 44 countries in Europe. While we have looked at the impact of the pandemic on the residential property market in some major European countries such as Germany and Spain, we can conclude that some European nations have witnessed a much harsher effect of the pandemic compared to others. However, with different governments now relaxing the lockdown measures put in place to deal with the spread of the Covid-19 virus, Europe’s housing market may show signs of life.

Germany has built a well established ecosystem of land registers that are managed by the local courts. While there are various reports forecasting which countries will perform better in the deepening recession, most of them suggest Germany has a far better resilience. Since the pandemic, Germany has accounted for more than half of all transactions in Europe.

Is China’s African investment ebbing away