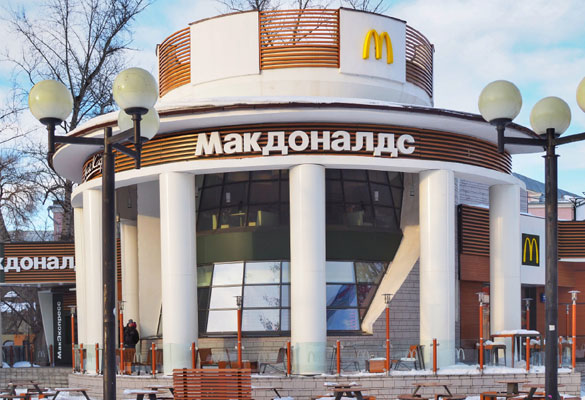 McDonald’s, Pepsi Co, Starbucks, Coca-cola are among the latest tranche of companies that are putting a halt to their Russian operations in light of the continuing escalation of the war in Ukraine. The decision by the major players in the food, beverage, and hospitality sector comes after Mars, Nestle, Mondelez, Pap John’s, Intercontinental Hotels, Hilton, Accor, Marriott too have already announced the suspension of their businesses across the Russian territory. Even operators running KFC restaurants and Pizza Hut locations said that their business will shut for the foreseeable future.

The proliferation of American fast-food restaurants across Russia, post the Cold War era, was a big showcase of the soft power of the West. Now, they will be wiped off the public imagination even if immediately. McDonald’s and Pepsi alone directly employ 100,000 workers across the country.

Pepsi said that while they will stop their soft drinks business, they will continue to operate their milk and baby foods business.

This follows the exit of sectoral behemoths from Russia in the aftermath of the war. Leading auto manufacturers, Jaguar Land Rover (JLR), Volvo, US-based General Motors, Daimler Truck, Volkswagen, BMW, Hyundai, Ford, and Toyota among others have made similar announcements earlier in the week. Similarly, in the energy sector, BP, Shell, Exxon, Eni too have stopped their units on Russian soil over humanitarian grounds. In the banking and financial sector too, there have been high-profile exits as has been in the technology space.

With this, there are only a handful of companies from the West that will remain in the Russian market and in effect reduce the choice of Russian consumers and affect the already jolted economy. The Russian stock market has taken a major hit and the currency has lost its value in the range of 30%.

Russia is suffering a major setback on multiple fronts as it faces sovereign sanctions issued by the US, Canada, UK, and European allies. The overseas assets of the Russian central bank have been frozen and Russian businesses have been effectively cut off from the rest of the world. Major Russian banks have been de-platformed from the SWIFT platform. Visa and Mastercard have stopped their operations meaning that Russian consumers cannot use those cards for any transactions involving foreign merchants even electronically.

Russian airplanes have been denied airspace over the Eurozone and many flights owned by Russian individuals and operators have lost their insurance coverage.

Full list of companies that suspended their Russian operations

Impact of Russia-Ukraine war on the Middle-East Economy

OPEC and partners mulls cutting production for the next three months