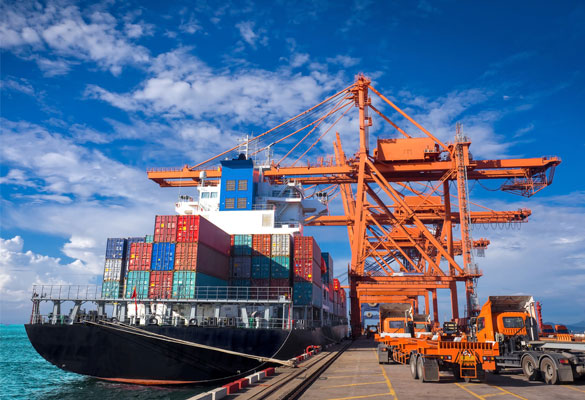 Maersk, the world’s largest container shipping company is reportedly diverting its ships from the UK as the nation’s biggest port, Felixstowe remains full of containers, according to media reports. The Denmark-based company has already started rerouting its ships away from Felixstowe, which handles 36 percent of the country’s container freight, rather than discharging UK-bound cargo in Europe for smaller vessels to transport to the island nation.

Lars Mikael Jensen, head of the global ocean network at Maersk said that the shortage of truck drivers means that it is taking longer than expected in the UK, compared to other countries to get fully loaded containers moved away from ports and to return the empty ones for pick-up.

He told the media, “We had to stop operations on a ship because there was nowhere to discharge the containers. Felixstowe is among the top two or three worst-hit terminals [globally]. We are having to deviate some of the bigger ships away from Felixstowe and relay some of the smaller ships for the cargo. We did it for a little while over the summer and now we’re starting to do it again.”

The current condition at the UK’s biggest container port has happened primarily due to retailers stocking goods ahead of the holiday and Christmas shopping season. While items will be widely available during the holiday season, but it is important for retailers to prioritise what they ship. The crowding at the ports has been happening all over the world since last year when the pandemic wreaked havoc on supply chains that increased the demand for goods. The Covid-19 pandemic also led to factory closures and restricted operations at the port which resulted in an increased cost of container shipping between Europe and China by six times, compared to the previous year.

But the situation in the UK has been particularly severe because of its acute lorry driver shortage. Felixstowe has announced that shortage of drivers means takes around 10 days before cargo could be taken inland to be unloaded, where previously it used to take around 4-5 days. Last week the port imposed restrictions on receiving empty containers from Maersk and Evergreen but it has begun accepting them again.

Emirates to operate a special one-off A380 service to Bahrain