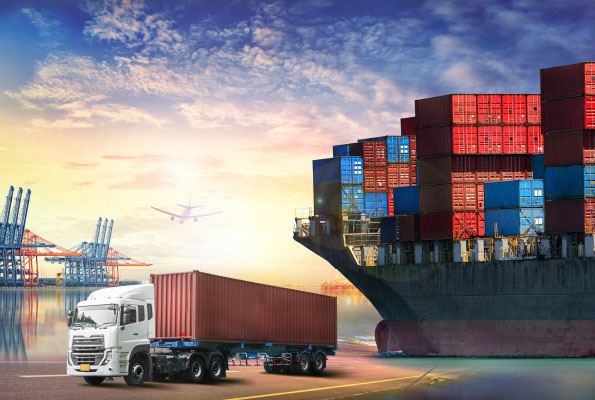 Ever since Russia invaded Ukraine, the ongoing war between them has been wreaking havoc on maritime and aviation freight. During previous conflicts of this nature, the warring countries suffered the maximum repercussions. However, the 21st century has improved technology and communication methods, leading to interdependence among nations for commodities, technology, and financial investments. Therefore, the war between Russia and Ukraine has not only generated repercussions on the warring nations but the whole world.

One reason for this is the price of oil as it is needed for the movement of all goods be it on land, water, or air. Since Russia declared war on Ukraine, Brent prices soared to $110 a barrel, meaning prices have risen more than 80% in just 12 months. This in turn has triggered inflation on a global scale.

Prices have peaked because Russia is the world’s third-largest oil producer and its inventory levels have been dipping for the past two years due to the effects of the COVID-19 epidemic. The present conflict has worsened the shortage in supply. Like oil, Russia is also a lead producer of gas. In fact, it provides for 40% of Europe’s total gas consumption. And this in turn has led to high energy prices across Europe, the UK, and the greater world.

A global economic model shows that in 2022, an average oil price of $100 per barrel would reduce GDP growth by 0.2% and increase inflation by 0.5%. High inflation will reduce household spending overall. However, the potential impact on GDP growth will vary widely by region, with major oil importers among the hardest-hit ones.

Other than the price of oil, a shortage of raw materials due to reduced production and transportation is another major reason for high prices.

Fault in supply lines
Russia and Ukraine are the prime exporters of metals such as platinum, aluminum, palladium, steel, xenon, neon, and chrome. Of these, palladium and platinum are widely used for running catalytic converters. Xenon, neon, and palladium are necessary for making semiconductors.

Since the war broke, they impacted the prices of these raw materials and their finished products drastically as the war disrupted the supply chain of these extraction processes as it was before.
Semiconductors are used for manufacturing all consumer equipment starting from mobile phones, to computers, and automobiles.

The two countries are not only a leader in energy production and mineral extraction, it is a marquee agricultural exporters too. And together with Ukraine, they are one of the lead exporters of barley, wheat, corn, sunflower oil, and maize. The usual agricultural processes of cultivating, harvesting, selling, and transporting crops have been hampered. And as a result, this conflict is likely to affect the production of staple food items, including bread, pasta, and packaged foods, because they require spring wheat as raw material.

Worse, countries in North Africa and the Middle East that are more dependent on these two countries are like to suffer the most on the back of the worst droughts in decades. Africa imports most of its wheat from Ukraine.

Because Russia and Ukraine account for almost one-fourth of worldwide wheat exports, global commodities prices have skyrocketed. Wheat prices have risen by 80% since April 2020 due to the epidemic and logistical issues; wheat futures in Paris jumped 16% on February 24.

Several Middle Eastern countries are severely affected by the rising prices and upset supply chain. Countries like Egypt are particularly vulnerable to increased commodity fee pressures due to their heavy reliance on imports. Around 30% of Egypt’s population is impoverished, and many of the poor rely on subsidized bread for nourishment. In other parts of North Africa, price increases and supply interruptions coincide with severe droughts.

Wheat shortages will exacerbate the region’s fragile states. Lebanon’s economic crisis has already harmed its people’s capacity to purchase food, with prices rising by 1,000% in less than three years. Lebanon imports wheat to cover most of its needs, with Ukraine accounting for around 60% of total imports. The country has around a month’s worth of wheat stored. War-torn Wheat shortages are also a concern in Libya and Yemen.

Further to make matters worse. Russia and Ukraine are lead exporters of fertilizers too.

Challenges in shipping
Shipping costs have shot up not only due to the rise in global oil prices and delays in goods reaching their destinations creating a supply-side shortage. Major global freight forwarders have suspended Russian suppliers, passing a sanction against their services globally, in light of the havoc caused by the Russian military in blocking off shipping routes, destroying ports, and stopping services in Ukraine.

The entire cost of shipping has increased significantly since this war molded China-Europe freight that traveled via the new Silk Road trade. Now, the world is in desperate need of alternative routes, which will lead to a sudden decrease in the need for Russia, its services and goods, in global trade.

The cost of rising insurance costs for shipping will further exacerbate the price of goods across the world which makes their way to ports via the Black Sea. Insurance companies are charging as much as a 10% premium on the value of the price of ships due to the ongoing war which effectively makes the cost of insurance higher than the value of hiring a cargo tanker.
The Black Sea is a key corridor for both trade and transportation for Russia, former parts of the USSR, and landlocked countries in Central Asia. The water body is used for the transportation of crops, crude oil, and agricultural products primarily from Russia and Ukraine.

Insurance companies are wary of missiles or mines damaging ships as at least five ships were severely damaged within a week of the war breaking out in Ukraine. Other than the risk of physical damage, ships are also at the risk of being seized by Russian or Ukrainian authorities which would trigger clauses by which insurers have to pay the ship owners the full value of the hull.

And for this, they are quoting prices higher than most customers can afford. A Bloomberg data compilation shows that transporting a million barrels of cargo to Italy from Russia will not cost $3.5 million compared to $700,000, the price quoted in 2021 during the same time of the year.

As a result of this, many of the world’s leading cargo operators have stopped plying these routes leading to shorter supply and high prices.

In fact, NATO had issued warnings of the threat of drifting mines in the Northwest, West, and Southwest areas of the Black Sea.

Global marine insurer North in its advisory at the end of the first week of April said the e threat of GPS jamming, AIS spoofing, communications jamming, electronic interference and cyber-attacks in the area are considered “high”.

Challenges of hybrid work and how to overcome them

Are super apps the future?