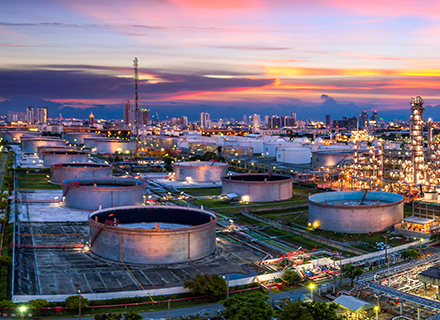 The outbreak of Covid-19 pandemic walloped the global oil market last year and the residual effects of it continue to affect the sector. The global oil price slump began last April. However, after the immediate downturn, partial rebound was registered towards a steep production slump, particularly among the OPEC nations and allies. Currently, the global oil consumption remains well below its pre-pandemic levels. The pandemic’s impact towards global oil consumption is expected to last longer than expected and the demand is expected to fully rebound only by 2023. This year the oil prices are expected to surge $44 per barrel from last year’s projection of $41 per barrel as the gradual surge in demand is in line with an easing of supply restraint among the OPEC+ economies. The price fluctuation of oil depends upon the duration of the pandemic, including fresh waves in many parts of the globe, and the speed at which the vaccine is produced and implemented.

The global oil demand growth was significantly weaker even before the outbreak of the pandemic as the market was already mired in a series of challenges and the implementation of new vehicle efficiency rules and regulations have started to weigh on transport fuels. The refining capacity expansion in recent years have outstripped the growth in demand, throwing a tough competition for an industry mired in strict product specifications. And notably the fresh rules were floated in the beginning of 2020 by the International Maritime Organisation (IMO).

Slump in global production led to price growth
The prices of crude oil recorded a strong rebound after dipping in March and April. The price per barrel was $42 in the third quarter. However, the prices were one-third lower than their 2019 average. The price rebound was driven by a steep production slump, especially by OPEC and OPEC+. The organisation agreed to lower production by almost 10 percent of oil supply to 9.7mb/d. Furthermore, the supply also recorded a sharp dip in the US and Canada. The surge in oil prices bolstered consumption rebound after some nations eased pandemic restrictions and travel.

The global oil price plunged from 100mb/d to 88mb/d in May last year and has remained below the pre-pandemic level since then. The slump was due to the OPEC+ agreement where it collectively decided to cut production by 9.7mb/d. Furthermore, the new compliance has been higher than the previous agreements. The OPEC+ decided to ease the restraints over two years, and this began in August with increased production of 2mb/d. The organisation is looking for an 2mb/d increase in January this year, although this increase can be postponed if the oil prices fail to rebound. Libya, which is a member of the OPEC but not included in the OPEC+, has witnessed production slump close to zero in mid-2020 due to internal geopolitics issues in the country, from an average of 1.1mb/d in the preceding year. However, the government last year vowed to rebound the country’s oil segment and oil recovery by bringing stability in the country.

The US Gulf coast became the largest seaborne crude oil export hub outside the Middle East in 2019. The region supplied 2.6 mb/d to world markets, surpassing Black Sea ports including Russian and Caspian crude, and Nigeria. The US Gulf Coast will bolster its position as the largest seaborne export hub outside the Middle East during the medium term, adding another 2 mb/d to seaborne crude oil exports. The US witnessed a one-fifth slump in oil production in May last year amid low demand and prices. While output has since rebounded, it remains about 10 percent lower compared to 2019. The country also witnessed a frail investment in the fresh oil production. Fresh drilling activity, which is called the oil rig count, also recorded a 75 percent slump, marking all-time low in August last year despite showing a modest rebound. According to the Federal Reserve Bank of Dallas, the majority of the shale companies in the country expect a major surge in fresh drilling until the price of WTI surges above $50/bbl—$10/bbl above its current level. The oil production is expected to remain nearly to 3 percent in 2021 due to a result of weaker levels of fresh investments.

Air travel collapse resulted in weaker consumption
The transportation segment accounts for two-thirds of oil consumption globally. The outbreak of Covid-19 pandemic has walloped one of the three primary transport fuels, jet fuel due to air travel collapse. The least affected fuel is diesel, as it was utilised for activities such as freight and shipping, which have been driven by the e-commerce segment. The consumption of diesel and petrol have seen a rebound in OECD economies after reaching a trough in April. However, the consumption of jet fuel is expected to remain lower. The global consumption is expected to remain below its pre-pandemic trend for the next few years. The pandemic has the potential to shift oil consumption rate through change in people’s behaviours in the long run.

The demand for air travel may not return to the normal level it was before the pandemic as business travel is curtailed in favour of remote meetings. As a result, the demand for jet fuels will also drop. The surge in work from home trends has the capability to slash demand for petrol, however, if there is a surge in the usage of private vehicles then this could somewhat offset the situation. The overall impact of the pandemic towards the global oil price is complex to quantify due to uncertainty such as fresh waves of the virus and change in corporate investment decisions and others. There are few industry scenarios which have indicated that the oil demand may have peaked in 2019, and several oil producing firms have unveiled changes in their long-term strategy plans, including a cutting on fresh hydrocarbon projects.

Global transition from oil to green energy
Global leaders and organisations are urging the oil and gas companies to become carbon neutral in the future in order to mitigate the risks of climate change. Therefore, the demand for petrol is expected to be weak between 2019 and 2025 as economies have started to follow fresh rules and regulations citing efficiency and reducing CO2 emissions. Global refiners, nevertheless, continues to develop new refiners in order to meet product demand.

However, the green energy transition impact on oil supply remains unclear as many oil firms are focusing on short-cycle projects for the coming years. The announcements by the global oil majors on cutting carbon dioxide emissions, till date have tended to prioritise on long term goals. Global investors, nevertheless, continue to push the industry to sharpen its focus on sustainability issues while the industry faces similar pressure from global environmental activists at the same time, especially in North America and Europe. The global oil segment faces headwinds over demand and supply uncertainty and changes in strategy and business models. The global oil majors are expected to buckle their seat belts in order to meet the global demand as well as achieve their carbon neutrality goals.

In one of the reports produced by the EIA indicates that the global oil demand is seen ramping up Brent prices to $76/b by 2030. The prices are expected to be $90/b in the next 20 years. The cheap oil resources are expected to have been exhausted by then and the price will drastically surge. The report indicates that oil prices will touch $105/b by 2050.
The reports also assume that petroleum demand will flatten out as the demand for cleantech energy grows. Furthermore, the report indicates that on an average the global economy grows 2 percent annually, while energy usage slumps by 0.4 percent a year. According to OECD, when oil prices surge, it results in demand destruction. People change their buying preferences if the high price prevails for a longer duration. The demand destruction occurred after the 1979 oil downturn. After that, the oil prices dipped for years. The situation worsens when demand goes down and supply is ramped up.

Global oil industry has a long way to go
The global oil supply has been mired by geopolitical tension apart from the outbreak of the Covid-19. The production losses of these three nations: Iran, Libya and Venezuela have touched 3.5 mb/d since the beginning of 2018 and even before the embarkment of the pandemic, things were haywire. However, by keeping these things in mind such as oil oversupply and OPEC+ cuts, the global oil supply is still expected to be buyout till 2025.

The global oil demand growth is expected to weaken oil consumption following a contraction last year as consumption of transport fuels surges steadily than expected. The global oil demand is forecasted to surge at an average annual rate of just below 1 mb/d between 2019 and 2025. Half of the growth is driven by the surge in the use of petrochemicals, LPG, naphtha and ethane.

The oil demand is forecasted to surge by a total of 5.7 mb/d in the next four years. Furthermore, the world’s oil production capability is expected to record a 5.9 mb/d at the same time. The oil production supply by the non-OPEC economies is expected to surge 4.5 mb/d while the OPEC is developing another 1.4 mb/d of crude and natural gas liquids capacity irrespective of the oil situation in Iran and Venezuela. The US has the potential to produce more oil in the coming years with its abundant resources despite its high price and is expected to lead from the front in terms of supply. Economies such as the Emirates, Brazil, Guyana and Iraq are also expected to deliver positive gains.

Robust growth in Asian oil demand is paving the path for oil producing economies to boost exports amid the pandemic. However, it is believed that non-OPEC oil producing economies are set to lose momentum and the OPEC+ economies will drive the show. The expansion rate in the US is slowing because independent producers are reducing spending and scaling back drilling activities in response to investor’s pressure.