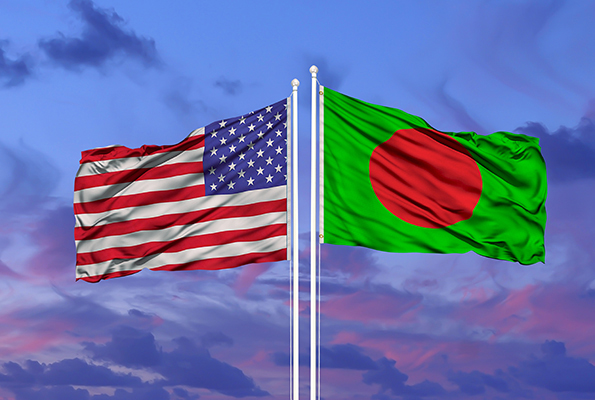 On October 27, Ambassador Peter D. Haas opened the 28th US Trade Show at the Pan Pacific Sonargaon Hotel in Dhaka. The US Trade Show in Bangladesh was put on with the help of the American Chamber of Commerce. It featured cutting-edge products and services from 40 US exhibitors representing energy, banking and financial services, food and beverage companies, and other industries.

This year’s trade show has special significance since it is the first US trade show to be physically staged in Dhaka since the COVID-19 outbreak began. Also, it happens at the same time that the US and Bangladesh have been friends for 50 years. The primary export market for goods from Bangladesh is the United States, and two-way trade between the two countries reached USD 10.64 billion in 2021.

According to the US ambassador to Bangladesh, Peter D. Haas, at the press conference, it was USD 9 billion in 2019, ranking Bangladesh as the US’s 46th largest trading partner. This is undoubtedly noteworthy, considering it was only a little over USD 1 billion in 1992.

A 50-year-old alliance
On April 4, 1972, the US recognized Bangladesh as a newly independent nation, which marked the beginning of diplomatic relations between the two countries. Both nations have had cordial relations over the past 50 years, growing their collaboration in development, climate change, terrorism, democracy, and human rights.

Relations were improved by several high-level visits, including President Bill Clinton and Prime Minister Sheikh Hasina’s historic meeting in 2000. As a result, bilateral trade, the most crucial aspect of any bilateral partnership, has also grown. By 2019, bilateral trade totalled USD 9 billion, with US exports to Bangladesh totalling USD 2.3 billion, up 14% from the previous year. In the interim, Bangladesh shipped to the US for USD 6.7 billion, up 9.5% from 2018. While Bangladesh imports machinery and agricultural goods from its counterpart, it also exports RMG items to the USA.

Since bilateral ties began, the US has helped Bangladesh expand in areas other than trade. The US sent war-torn Bangladesh aid and support just after the Liberation War. Since then, assistance has grown steadily, including the most recent COVID-19 pandemic relief. Bangladesh is the third-largest recipient of US aid in South Asia, which is worth emphasizing.

The US supported Bangladesh’s liberalization effort in the 1980s through the International Monetary Fund’s structural adjustment program. In addition, the US has made sizable Foreign Direct Investments (FDI) in Bangladesh, with the energy industry receiving most of these.

A few temporal problems have arisen throughout history and have been resolved constructively. For instance, the US refused to send Bangladesh 2.2 million tonnes of food in 1974 because Bangladesh had signed a jute export agreement with Cuba. Bangladesh immediately acknowledged the US’ worry and cancelled the deal. Again in 2013, the US refused to grant Bangladesh GSP preference due to the country’s hazardous employment conditions. The TICFA agreement, which established an annual meeting to discuss issues relating to bilateral trade, was signed by nations the same year. But at the moment, the sanctions have created a “strain” in the relationships, and a new vocabulary has evolved that is dictating how the bilateral interactions should be portrayed.

An alternative to China
The United States wants to rely less on China for imports. The nation is considering Bangladesh as one of the most likely alternatives as a source for goods imports as a result. In the past, the US attempted to establish such choices in Vietnam or African nations. However, Washington has distanced itself from those nations on the China problem. The players in the nation’s commerce industry believe Bangladesh has more potential than other nations.

Competitors in Bangladesh are becoming more expensive locations to conduct business. China’s exports of manufactured goods with a high labour component are expected to decrease in the following three to four years. It won’t hold a third of the global market share for clothing, textiles, footwear, furniture, toys, electrical goods, auto components, plastic, and kitchenware. Bangladesh’s exports of manufactured goods would nearly quadruple if it were to capture just 1% of China’s manufacturing export markets.

Bangladesh’s wages are less than one-third of those in China or Indonesia and only half in India. Other nations exporting clothing that are taking advantage of the meager labor costs include Cambodia, Pakistan, and Vietnam. Bangladesh can benefit from this inexpensive advantage over its rivals.

Suppose Bangladesh can overcome the infrastructure barrier and utilize its sizable labor pool of underemployed workers. In that case, it can become the “next China,” with its labor-intensive manufactured exports expanding yearly at double-digit rates.

According to a recent World Bank research, Bangladesh could grow its commerce by roughly 38% if it could raise the standard of its business environment to that of India. Bangladesh must take action immediately, or else others will take the markets that China is leaving.

America underlined the priorities of the Biden administration, including its Indo-Pacific Strategy (IPS) and a renewed emphasis on democracy and human rights. To “contain and rebalance” the expanding Chinese footprint in Bangladesh, Washington is also eager to get Bangladesh to join two defense agreements, the General Security of Military Information Agreement and the Cross-Servicing Agreement. To settle the conflict in Ukraine, the United States sought Bangladesh’s assistance.

In contrast, Bangladesh underlined its worries about two contentious issues: The 2013 suspension of Bangladesh’s Generalized System of Preference (GSP) facilities, which Dhaka wants to be reinstated, and US sanctions on Rapid Action Battalion, which Dhaka wants to be eased. The team from Dhaka also emphasized the passage of the law on election commission establishment as a step toward bolstering Bangladesh’s democratic system.

Dhaka has disassociated itself from joining the Quad, which is commonly perceived in the area as a military coalition opposed to China. It would be foolish for Dhaka to irritate Beijing, given Bangladesh’s “strategic partnership” with China, which is its leading trading, defense, and development partner. However, Bangladesh’s strategic connections with Beijing do not imply that Dhaka is forsaking the West, particularly the United States.

Bangladesh is one of the prime contenders to replace China, India, Vietnam, Cambodia, Pakistan, etc.

Hurdles for American businesses
Despite the expansion of commercial relationships between the two nations, the opportunities presented by this still need to be fully taken advantage of. The largest single market in the world is the US. The nation’s GSP-eligible trade incentives have been suspended. As a result of GSP, rival nations are exporting more goods to the US market. Even though the United States is the country’s biggest garment market, Bangladesh has yet to experience the growth hoped for in this country. Competing nations Vietnam and India are advancing in this path as well.

The United States imports more than USD 2 trillion (200,000,000) worth of goods every year. Bangladesh has hardly any involvement in this. US businesses operating in Bangladesh cannot conduct their operations in peace. The country’s laws are pretty ambiguous. For US investors, profit is what matters most. Asia is a significant market for US businesses. The nation’s business in Bangladesh pales in comparison to that.

Bangladesh needs to pay more attention to the level of systemic development required to keep the big US companies and bring in new ones. Eliminating issues like tax complexities is something that should be considered. Additionally, thinking fields must be more combative. Business procedures must be made simpler. Trade dispute resolution procedures need to be more open.

To enhance relations with the country, it is vital to comprehend it better. They must learn their strategic priorities better. The two nations share a complex economic relationship and exchange of ideas. We must understand these concepts. They can build interconnected systems by working together. Then, a financial relationship many times more significant than the one currently in place is imaginable.

According to businesspeople engaged in bilateral trade between the United States and Bangladesh, many indirect improvements have been made to the two nations’ relations. As a result, the basis of the two-way links is now quite substantial. Currently, US businesses are concentrating on boosting investment in Bangladesh, which is anticipated to rise shortly.

Exports and FDI might be apparent. But less obvious sectors, including knowledge transfer, have improved Bangladesh’s relations with the US. Recently, the Pran group and Procter & Gamble began sharing production. Sharing knowledge and technology is what it is. Over the past five years, business people from Bangladesh have been extremely cautious in their dealings with the United States. Bangladesh receives a lot of support from USAID in technology transfer. Bangladesh received the Pfizer vaccination from the US, while India did not. In general, trade interactions have a favorable influence on various concerns. Regarding economic diplomacy, Bangladesh is in a powerful position with the US.

Additionally, a geopolitical context exists. The role of Bangladesh in the Indo-Pacific strategy is growing. However, the pace of economic diplomacy was significantly slower five years ago than today.

Bangladesh has demonstrated outstanding achievements in all disciplines for more than five years. Economic ties have grown significantly with practically all friendly nations. However, during the past five years, economic diplomacy with the US has increased dramatically. Because of the improved economic ties, we can sell goods for lower prices. Our deliveries of goods are timely. The United States is inclined to support Bangladesh for these reasons.

The fundamental fact is that Bangladesh can meet the needs of the United States. Previously, the nation did not purchase medications or medical supplies. They were forced to take medication and PPE during COVID. Bangladesh is where they are leaning due to necessity. It’s a win-win circumstance. The US also gains from this. Bangladesh gains as well. Economic ties with the United States will improve because we are liberal.

The US may also invest in one hundred of the nation’s growing economic zones. We encourage national business owners to move their factories here. Overall US-Bangladesh economic diplomacy is a crucial cornerstone of geopolitics in Southeast Asia.