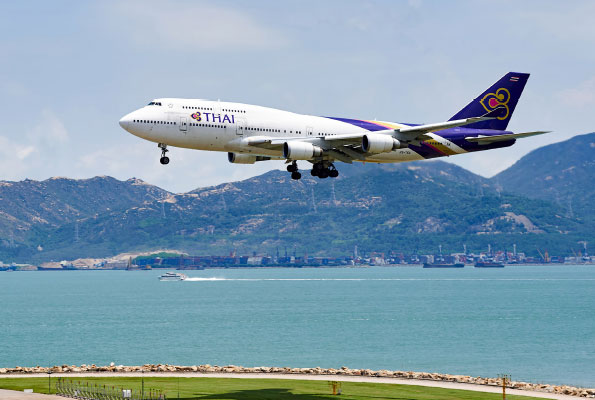 Thai Airways International is poised to expand again after a five-year austerity effort. The airline president Charamporn Jotikasthira in an interview in Bangkok on August 17 said that the company aims to extend routes and acquire new, more fuel-efficient planes to replace older jets. The airline, which last purchased planes in 2011, is putting up a 10-year strategy that will involve jet acquisitions to enhance passenger growth until 2027. Thai Airways International recorded its first full-year net profit in five years in 2021, thanks to one-time contributions from asset sales and reductions in employee benefits.
Despite the government abolishing quarantine rules for vaccinated overseas tourists, the Thai flag carrier’s operating performance has failed to show evidence of lasting improvement.

The expansion plan
Thai Airways is catching up to full-service airlines such as Singapore Airlines Ltd. and low-cost carriers such as AirAsia Bhd., who have spent billions of dollars in aircraft acquisitions while Thai Airways has shrunk its fleet.

According to Charamporn, adding new planes that consume less fuel would help the Thai flag carrier maintain expenses as it expands routes and competes more fiercely on ticket prices. The company recently announced a consolidated net profit of 55.1 billion baht ($1.7 billion), reversing its worst-ever net loss of 141 billion baht in 2020. The recovery reflected the company’s restructuring efforts as part of a court-supervised rehabilitation program.

Piyasvasti Amranand, a Thai Airways board member in charge of the company’s rehabilitation, stated while the company has registered profit, it was not due to its operational success but due to asset sell-offs.

The airline’s already precarious financial situation was further weakened by the COVID-19 epidemic and accompanying travel restrictions throughout the world, leading it to apply for rehabilitation with the Central Bankruptcy Court in May 2020. Its reconstruction plan was finally authorized in June of last year.

The selling of assets and shares resulted in a profit of 4.4 billion baht for the corporation. To help shore up its finances, Thai Airways had listed various assets for sale. Reducing employee benefits and cutting executive posts resulted in an extra 8.8 billion baht. Debt restructuring also added 61.8 billion baht to the company’s resources by extending loan and debenture repayment dates. The corporation was able to avoid debt payments by entering a court-supervised rehabilitation program. Penalties for missing repayments from May to December 2020 were retrospectively forgiven and added as an unusual gain in 2021.

Meanwhile, the cost of severance payments for an early retirement program was 4.6 billion baht, up 51% over the previous year.

In November, Thailand had begun welcoming visitors without quarantine as part of a desperate attempt by the government to resuscitate the economy. This helped boost air travel, however owing to the omicron epidemic, the quarantine waiver was later halted for six weeks, beginning in late December. The tourism-boosting initiative was also implemented too late to have an impact on Thai Airways’ operating performance in 2021.

Passenger and extra baggage revenue were 5.5 billion baht, down 84% from the previous year. Over the same period, freight and postal income increased by 59% to 10.9 billion baht, owing to increased demand for deliveries triggered by the global economic recovery. Flights will be unaffected by Russia’s invasion of Ukraine.

Thai Airways has not flown over Ukrainian airspace since 2014, according to the company. It does not fly to Russia or Ukraine on a regular basis.

In January, Russians were the most frequent visitors to Thailand by nationality, but they generally use charter aircraft. Geopolitical concerns, on the other hand, have driven oil prices much higher. Higher fuel costs are expected to increase the cost of travel, deterring potential tourists.

Betting on the future
Next year, the Thai flag carrier hopes to return to a consistent operational profit. Piyasvasti asserted that the airline’s profitability had increased dramatically as a result of lower operational expenses. Thai Airways will begin to make an operational profit if other nations’ travel restrictions are eased, according to the director in charge of the rehabilitation.

Flights to nations and areas that are currently open, such as the European Union, Australia, India, and Saudi Arabia, will be increased. By the end of the year, Piyasvasti believes Japan and South Korea will have lifted their travel restrictions. China, on the other hand, is expected to close for the full year, according to him.

The carrier is exploring new routes to the United States; however, it will not fly to Los Angeles, which it discontinued last year, according to Charamporn. From the 37 new planes announced in 2011, Thai Airways still has 14 more planes on the coming in 2018. The airline operates 94 planes and has grounded 13 of them, including the four-engine Airbus Group SE A340 and Boeing Co. 747, which it has been unable to sell due to their relative fuel inefficiency and age, according to the executive.

Thai Airways began adopting a new management system for prices and itineraries last week, according to Charamporn, which improved the airline’s competitiveness in ticket pricing. He claims that the technology can access rivals’ prices in real-time, allowing the corporation to modify rates in hours rather than months. The worst is over, Charamporn stated in a recent media interaction.

Troubling reality
Despite turning a profit for the first time in five years, the flag carrier’s financial woes are far from finished. The company’s shareholder equity had increased in December, although it remained negative 71.3 billion baht, compared to negative 128.7 billion baht in December 2020.

Its overall assets decreased by 23%, while its liabilities decreased by 31%. Unlike many other formerly debt-ridden international airlines, such as Japan Airlines, the airline has given up on receiving write-offs from its creditors. Thai Airways’ financial situation will remain precarious for the foreseeable future, limiting its capacity to spend fast in the future.

The airline is in negotiations with its creditors for a 25 billion baht extra loan to help it get through rehabilitation. In March, the airline will have a final conversation with banks and sign a deal by the end of the month, according to Piyasvasti. The loan will be underwritten by Bangkok Bank, Thailand’s largest commercial lender. According to the airline, co-underwriters might include Krung Thai Bank, Export-Import Bank of Thailand, Government Savings Bank, and Kasikorn Bank. The loan will be secured by the company’s assets, which include land, planes, and even aviation components. The assets were estimated to be worth 30 billion baht.

Employee compensation amounting to 4 billion baht will be spent from the new revenues, while unused ticket refunds would contribute 10 billion baht. The remaining funds will be utilized for operating capital.

Thai Airways’ initial restoration plan, which was accepted by the court, contained a government loan of 25 billion baht. However, the government opted not to issue the loan late last year, requiring the airline to find another solution. The revised strategy will need to be approved by the court once more.

The origins of the crisis
The airline was founded in March 1960 as an international airline, but in April 1988 it merged with Thai Airways Company, a domestic carrier. The airline began purchasing a variety of aircraft for its fleet in the 1990s. Because different airframes and engines needed more experts and greater maintenance costs, this strategy was eventually blamed for the company’s future financial woes. The company made its first loss in company history in 2008, after more than 40 years of profit – roughly 21 billion baht – despite earning more than 200 billion baht that year. High fuel prices and Thailand’s political unrest were blamed by the airline.

The losses soared to a record 141 billion baht last year, following meager earnings of 48.3 billion baht during the COVID-19 epidemic. In comparison to a year before, this represented a 73.8% decline in income and an astounding 1075% increase in losses.

The COVID effect
After COVID-19 rocked the global airline sector in 2020, the national carrier had its worst year of operations. The pandemic resulted in travel restrictions and a drop in tourist and traveler demand. Airlines all across the world were forced to cancel flights, lay off staff, and appeal to governments and investors for financial assistance. Many of them applied for Chapter 7 bankruptcy protection.

The company did what it had done previously and sought government assistance, requesting a guarantee from the Finance Ministry for 50 billion baht in loans to keep its operations functioning.

This time, though, things were different. The people pressured the government not to carry the airline’s financial load again as the COVID-19 situation worsened. Analysts noted that a 50 billion baht loan was unlikely to be approved.

Cost-cutting measures
According to the company’s interim president Chansin Treenuchagron, the restructuring plan aims to generate 50 billion baht in new capital over the next two years through new shares or borrowing, with the objective of returning to profit in 2025.

Meanwhile, the company wants to downsize its staff from 29,000 to 14,000-15,000 employees by 2025, as well as its fleet from 102 to 86 aircraft, decreasing aircraft types from twelve to five and engine types from nine to four. Negotiating reduced airplane rental costs is also part of the cost-cutting strategy.

The rehabilitation plan for THAI recommends no debt haircuts, but it does ask for waiving off of outstanding interest on loans and a six-year delay in bond obligations. It also has a debt-to-equity exchange option.

The company made 2.7 billion baht in January through the sale of shares in its subsidiary Bangkok Aviation Fuel. It also offered to lease out certain properties and sell more than 40 used airplanes, five sets of aircraft engines, a land plot, and a building in Bangkok.
Meanwhile, grounded passengers were invited to dine in first-class at the carrier’s headquarters restaurant. It also had stores all throughout Bangkok selling in-flight foods, including “pa tong ko” (fried dough) and croissants, which drew long lines.

Not an isolated incident
During the COVID-19 outbreak last year, more than 40 airlines around the world went bankrupt.

Many of them, like Thailand’s low-cost airlines NokScoot and Orient Thai Airlines, have halted operations or gone out of business entirely, while others, such as Thai Airways, are seeking to return from the brink.

Virgin Atlantic and Thomas Cook of the United Kingdom, Alitalia of Italy, and Jet Airways of India are among the well-known airlines that have filed for bankruptcy and sought debt relief.