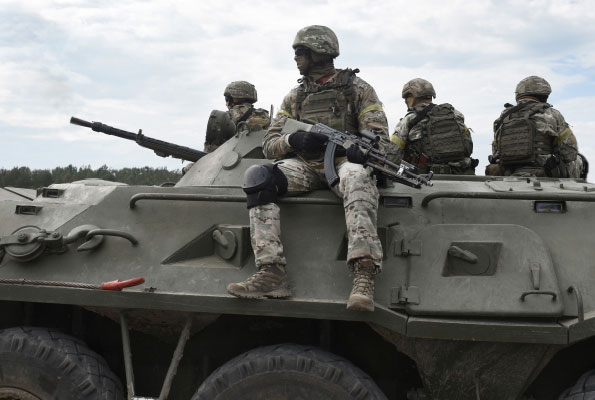 The Russia-Ukraine war is the most severe armed conflict in Europe since the Second World War. It is poised to affect the global economy, crawling through a zigzag recovery trajectory after being hit by the Covid-19 pandemic. Though tension was brewing over the past few months due to the amassing of Russian troops near the Ukrainian borders, the sudden attack by Russia on February 24 has deeply shocked and caused utter disbelief to nations, political leaders across the world. There has been speculation that if the conflict sustains itself, it may set the stage for a new world war. However, keeping speculations aside, the Russia-Ukraine war’s financial impacts on the global economy can be gauged only after the emergence of the endgame, which means after Russia withdraws its troops from Ukraine. The stock markets have been volatile, inflation is on the rise, the investors’ confidence in the markets is falling, and the current conflict is set to make the global economy further vulnerable after a terrible ‘once-in-a-century’ setback due to the pandemic. The impact is expected to range from moderately optimistic to extremely serious depending on the tenure and scope of the ongoing Russia-Ukraine war, the severity of the sanctions by Western countries, and any further escalations in the retaliations.

Stressing the global supply chain
The Russia-Ukraine war will severely impact the global supply chains that are already in a fragile state since the start of the pandemic. Given that Russia and Ukraine form a critical global hub in the production and supply of oil, natural gas, industrial metals, fertilizers, food commodities, the problems in global supply chains shall only exacerbate across industries. The problem will be acute, particularly for those heavily reliant on energy resources. Russia supplies 40% of Europe’s gas. This makes the European nations heavily dependent on Russian gas supplies. Hence, finding an immediate alternative will be difficult for these countries. The more pressing concern is the impact of the crisis on the price of oil, gas, and other commodities. Any sharp rise in prices would only add to inflation and hit consumers. The disruption to gas supplies could also significantly impact global energy prices. Considering Russia is the leading oil and gas supplier to Europe, the risk of soaring energy prices shall be most severe in the European nations.

Russia and Ukraine also lead the global production of industrial metals like copper, aluminum, nickel, and iron ore and remain the leading suppliers to the European markets. Russia is also home to around 40% of the world’s palladium, a key ingredient in semiconductor chips in electronic devices that has application in the automobile manufacturing industry. Auto manufacturers also use palladium in catalytic converters in gasoline-powered vehicles to curb emissions.

Impact on food security
Russia is the world’s largest wheat exporter, and Ukraine is the fifth largest. Further, Ukraine is also a significant supplier of barley and corn to the European markets and a top producer of other commodities like fertilizers, edible oils. Russia and Ukraine jointly account for nearly 30% of global trade in wheat, 32% for barley, 17% for corn, and more than 50% for sunflower oil seeds. Thus, the crisis cuts into food and energy supplies, impacting the agricultural sector (grain, edible oil) and energy supplies (gas). This means that people of different countries will be burdened with higher prices of these staple food commodities. The Food and Agricultural Organization (FAO) has already warned that the conflict can disturb the food supplies, increasing the prices of commodities by 8 to 22%, potentially triggering food insecurity globally.

The likely fallouts
Economists predict the following three possible scenarios emerging from the ongoing conflict between Russia and Ukraine. The severity of the Russia-Ukraine conflict’s impact across different economies depends on the duration of the crisis and the western sanctions. The first likely scenario is wherein there is a swift end to the crisis, with the withdrawal of troops by Russia with a pro-Moscow regime in Ukraine. This can ensure quicker recovery from the recent slump in world trade without necessitating any major financial reforms. The second scenario is a prolonged conflict among the two nations, which can entail significant sanctions on Russia by Western countries, disrupting Russia’s oil and energy supplies, whose ripple effects will keep shocking the global markets. The third and the worst possible scenario could be a complete shutdown of energy supplies. This will result in a severe recession across European markets, further creating ripple effects on American and other global markets. It will force the central banks of the affected countries to induce stringent financial reformative measures.
Considering the possibilities of the above geopolitical conflict, the following are the impacts on the different regions of the world.

Varying effect on regions
The US is one of the main actors involved in the run-up to the ongoing Ukraine crisis. As a country that has committed many foreign invasions in the recent past, the US is comparatively insulated from the after-effects of the crisis with a mild to moderate impact on its economy, provided the conflict does not prolong to the point of shutdown in energy supplies. As understandable, this conflict is only serving the geopolitical interests of America. However, a protracted Russia-Ukraine war can profoundly impact the American economy through Europe.

Being in the relative vicinity of the conflict region and due to its anti-Russian interests, the impact is likely to be moderate as far as Britain is concerned. The disruptions in energy supplies could impact inflation with higher energy prices and negative spiral growth. The UK is already facing inflationary pressure and a 4.1% unemployment rate caused by the Covid-19 pandemic, and it is gradually treading on its path to recovery. This negative growth could further spiral depending on the continuity of the crisis. The worst-case scenario of a shutdown of energy supplies shall further deepen the negative growth. With higher inflation, there is every possibility of the UK entering into a recession due to heightened uncertainties. This scenario remains predominantly similar to other European markets. Hence, the UK would consider its best interests and do its best to de-escalate the tensions at the earliest.

Unlike the UK and US, the Middle Eastern countries are more exposed to the crisis as they import the lion’s share of their wheat from Russia and Ukraine. Egypt imports nearly 85% of its wheat from eastern Europe through the Black Sea. An estimated 70% of Russia’s wheat exports went to the Middle East and Africa in 2021. Likewise, most of Ukraine’s wheat exports, of over 50%, are sent to the Middle East and North African countries. The ensuing conflict has also given the Middle Eastern countries an option to leverage their position among the US and the European nations. However, there is going to be mild to moderate repercussions in terms of their economy as Saudi Arabia and Qatar, the leading crude oil and liquified natural gas producers of the region, are getting enhanced demand to divert their supplies to the European markets, providing an opportunity to make short-term gains. However, it must be noted that no country can replace Russia in terms of gas supplies, and many countries are hoping that there is a quick end to this war. Conflict-ridden countries like Libya and Syria will face further challenges and ongoing internal instabilities. Hence, a swifter resolution of the crisis will avert troubles in food supplies to the Middle Eastern countries.

Like the Middle East, Africa too is dependent on the two war-torn nations. Given that Russia and Ukraine collectively supply 30% of the world’s wheat, the ongoing conflict’s impact on the African region needs to be monitored closely. Most of Africa’s wheat imports come from Russia and Ukraine, and corn imports from Ukraine. There could be severe disruptions to the food supply chains in the African countries dependent on imported food grains. Many African nations are already suffering due to the worst drought in decades, and they are on the verge of a catastrophic famine. Countries like Burkina Faso, Chad, the Democratic Republic of Congo, Ethiopia, Madagascar and South Sudan suffer from acute food shortages and need food relief. Therefore, a prolonged Russian-Ukrainian war could harm Africa’s food security and trigger a massive famine in the drought-hit region. A quick and peaceful solution to the Russia-Ukraine conflict is essential to avert such a catastrophe.

The South Asian region relatively is expected to face milder impacts with the ensuing Russia-Ukraine conflict. However, a quicker resolution is also beneficial to the regional interests, as the countries are recovering from the economic shock of the Covid-19 pandemic. The conflict has also brought the region to the forefront of global geopolitics, with the primary players being India and China. Both India and China have exercised their right to remain neutral, remaining agnostic to support either of the parties. China has been a long-standing Russian ally. The Russia-Ukraine conflict has provided China with an advantageous position to strengthen further its position in the east as a global superpower and an opportunity to try its chances on Taiwan. The crisis also enables China to negotiate its relations with the USA, especially in the Indo-Pacific region.

India has been gradually recovering from the economic crisis induced by the pandemic, and the International Monetary Fund (IMF) has predicted a rebound in growth “influencing both the region and the world”. India too has taken a neutral stand, going with its non-alignment policy, seeking de-escalation of military conflicts, and engaging diplomatically with both Russia and Ukraine. The war can have some marginal impacts on India’s edible oil and fertilizer imports from Ukraine.

How this sinking airline is plotting a turnaround

How the war will disrupt global supply chains

How to capitalize on a growing HNWI market?