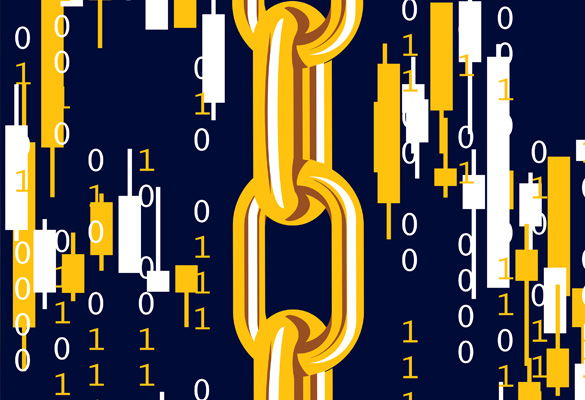 In recent years, blockchain technology has the potential to change the world and it has received a lot of attention in recent years. Back in 2017, JP Morgan Chase CEO, Jamie Dimon said bitcoins are worse than tulip bulbs and the future of bitcoin in the market is very gloomy. Lloyd Blankfein, senior chairman of Goldman Sachs echoed Dimon’s thought saying that bitcoin might be used to perpetrate fraud and a currency that moves digitally doesn’t feel like a currency at all. However, blockchain is now regarded as a tech of the future. Blockchain also uses smart contract tools which have the potential to automate manual processes from compliance and claims processing to distributing the contents of a will. To put it in simple terms, blockchain is nothing but a digital transaction record.

Another feature of the blockchain distributed ledger technology (DLT) could also help corporations establish better governance and standards when it comes to data sharing and collaboration. Blockchain and DLT have the opportunity to disrupt the banking industry, which is currently valued at $5 trillion by disintermediating the key services that banks provide. Blockchain has the ability to decentralise the ledger for payments and it could also facilitate faster payments at lower fees than banks. DLT also has the capability to reduce operational costs and has the ability to bring us closer to real-time transactions in financial institutions.

Additionally, Initial Coin Offerings (ICO) is currently experimenting with a new finance model that unbundles access to capital from traditional capital-raising services and firms. Blockchain also aids in improving security as it tokenises traditional security such as stocks, bonds, and alternative assets and places them on a public blockchain, thereby creating a more efficient and interoperable capital market. Blockchain removes the need for gatekeepers in the loan and credit industry, making it more secure and providing lower interest rates.

How can blockchain disrupt financial services?
Blockchain has grown increasingly popular over the years. In 2016, the International Securities Association for Institutional Trade Communication released a survey for the future of the global financial industry. The report mentioned that around 62 percent of firms saw investment in technology as the top area of focus in 2016-17 and these firms also showed a renewed interest in sectors such as cybersecurity technology. Additionally, the survey also pointed out that 55 percent of these firms were already developing blockchain technology at that time.

Coming back to the financial industry, more and more players are now looking at blockchain. Currently, blockchain technology is present in digital currencies, which has become more and more popular. Last year, bitcoin became a trending topic in the financial sector, especially when its price skyrocketed, before dropping dramatically earlier this year. And despite its rise and fall, the demand for cryptocurrency is rising and new ones are being created every day. Keeping digital currencies aside, a large number of financial institutions are adopting blockchain that helps them simplify their operations and cut costs. According to a 2018 report published by global management consulting firm Accenture, the world banking sector is expected to save $20 billion by 2022 with the help of blockchain.

While there might be a few financial institutions that might be hesitant to apply blockchain technology since it’s fairly new, others have recognised the importance of blockchain technology in the banking industry. Experts have warned that if these firms don’t find a way to integrate blockchain into their operations, it could be very difficult for them to adapt to the growing environment.

One of the most important features of blockchain is that it eliminates the need for third parties in financial transactions. Because of this, many have predicted that it could eliminate the need for banks altogether. Banking institutions can utilise this technology to automate their processes and free up valuable resources. Talking about consumers, the implementation of blockchain means faster payments and lower fees. Additionally, blockchain also has the potential to make financial institutions more efficient as well.

Another way blockchain technology can disrupt financial services is by fundraising. Blockchain has created a new funding model for startups where it helps them raise capital. Similar to other crowdfunding methods, initial coin offerings, backed by blockchain, give the public an opportunity to invest in a company in exchange for goods, services of monetary return. Where blockchain differs is that it gives users immediate access to the funds they collect without unnecessary fees paid to a third party.

When it comes to international payments, if you want to make a payment using your bank account, it may take several days to complete. Additionally, the transactional cost of sending an international payment might be high. Talking about blockchain finance, both central and commercial banks throughout the world can use the new technology to process payments and maybe issue their own digital currencies. Blockchains are not constrained by borders and do not require middlemen. It doesn’t matter if the transaction is local or cross-border, the slowest blockchains may complete a transaction in as little as 15 minutes, while the fastest can accomplish it in seconds.

In stock trading, blockchain-based trading transactions eliminate information redundancy and hence increase performance. As a result, minor transactions among groups of traders can be handled swiftly outside of the blockchain and only the final one will be recorded. The implementation of blockchain in stock trading can help eliminate the need for intermediaries. In the absence of a third party, regulations are more likely to be put into smart contracts and deployed, ensuring that no one can cheat another.

Blockchain in banking
Even though blockchain is still in its development phase, it possesses the potential to drastically change a wide range of industries and sectors including banking. Efficiency and transparency are important aspects of the banking industry hence blockchain has the potential to disrupt the sector. It can be used to facilitate cross-border transactions, money exchanges in real-time. This means companies that operate globally companies could have instant access to their funds anytime and anywhere. These funds could be in continual motion which often is not the case.

Funds in continual motion could change global trade immensely. Blockchain is already being implemented when it comes to trade finance. Many banks have carried out trade finance transactions with blockchain and the results have been promising, often leading to reduced time and efficiency. Trades are still largely manual and paper-based. This is because numerous parties are involved in a transaction. Blockchain can change that.

Another aspect blockchain is useful for the banking sector is the fact that it does not involve any third party which decreases costs. It also reduces counterparty risk and enhances automation. Over the years we have seen banks migrating from traditional methods of securities to technology-based methods. Banks have started experimenting with blockchain, which facilitates the transfer of digital assets among market participants in real-time.

Many financial spend millions every year on consumer records. With blockchain, all consumer records could be stored in one location and can be accessed as and when the need arises. If done manually, the Know Your Customer (KYC) process can take as much as 30-50 days or even longer. Current KYC processes also entail substantial duplication of effort between banks and third parties involved in the process. We must also take into account that the annual compliance costs are significantly high. Also, failing to follow due diligence in the case of KYC could lead to substantial fines. A Thomson Reuters survey revealed that an average bank spends nearly £40 million every year on KYC compliance. The cost sometimes goes up to as much as £300 million for some banks. In 2020 alone, global institutions paid $10.4 billion in fines related to anti-money laundering, KYC and data privacy issues.

The current KYC process is often tiresome, long and fails to serve its purpose on the financial institution front. Sometimes it can be repetitive as well and this creates an annoying experience for the customers. Blockchain can solve all of these problems and make the KYC process a much simpler and efficient one. In a blockchain-based KYC platform, the customers complete a one-time setup using their identity documents. This gets uploaded to a common server, Once uploaded, the data become accessible to all the parties involved in the process and can be accessed easily. It is also the safest way to avoid fraud and money laundering. As we move forward, the use of blockchain by the banking industry will grow substantially.

How Blockchain is changing trade finance
Trade finance is an important aspect of global trade as it serves as the lifeblood of international by enabling transactions between buyers and sellers who are often based in different parts of this world. Trade finance facilitates global trade by providing credit, payment guarantees, and insurance necessary for the transactions. However, trade finance comes with its limitations and challenges. One of the biggest limitations of trade finance is that it is paper-based. It involves a huge volume of paper documents that make up much of the information flow between the buyers and sellers involved in the trade.

It is time consuming as the paperwork is often being shuffled back and forth between the different parties involved in the trade, their banks, shipping companies, insurers, and others. This process is not only time consuming, but also the cost involved in verifying these documents at different phases in the trade proves to be an expensive process. Another drawback of paper documents is that they are error prone or even forgery. So far, many banks in different parts of the world have applied blockchain to trade finance.

Last year, Singapore-based banks DBS Bank and OCBC Bank took the lead in digitalising trade finance in the region by adopting blockchain technology. Both the banks issued their first electronic banker’s guarantee on the Singapore Customs Electronic Banker’s Guarantee Programme on Monday. The programme is designed to shorten the banker’s guarantee issuance and submission process to the Singapore Customs from about four working days to less than 24 hours.

Blockchain can redefine value chain interactions, reduce operational complexity as well as transaction costs as it entails a distributed database that maintains a continuously growing list of transactions. Such transactions are recorded in units called blocks which can’t be tampered with easily. There are numerous benefits of blockchain in the case of trade finance. Firstly, it will allow different parties in the value chain to access or review documents in real-time, thus reducing the time it takes to initiate shipment. Invoices generated at different phases of the transactions can also be viewed in real-time. According to a Deloitte report, an important benefit of blockchain with regard to trade finance is disintermediation. The report said, “Banks facilitating trade finance through Blockchain do not require a trusted intermediary to assume risk, eliminating the need for correspondent banks.”

KPMG said in a report, “With immutable records that are visible to everyone involved, blockchain may improve data accuracy and security, help reduce the risk of fraud, and show compliance through an audit trail. For example, when supply chain information is put on a blockchain, companies can potentially reduce fraud and errors, improve inventory management, identify issues more quickly, reduce delays from paperwork, and increase trust among all parties. Blockchain also offers the potential to create a single source of information around customer identity, reducing costs and risk related to Know-Your-Customer regulations.”

The report further added that thanks to consensus mechanisms and smart contracts, blockchain can minimise the time that capital is tied up for a transaction, instead of triggering an automatic transfer of funds upon an agreed set of conditions. Blockchain will also eliminate some transaction fees by reducing reliance on third parties, and it will likely free up capital flows as the purchase of managed funds moves to real-time.