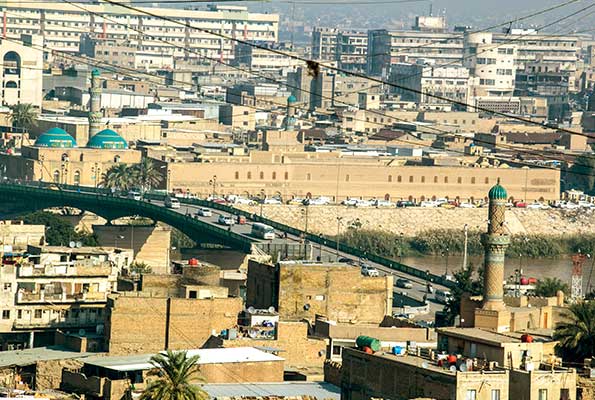 A century-old Iraqi home overlooking the Tigris River in Baghdad is run-down and abandoned. A warning that reads “Danger of collapse” is posted near the entryway, discouraging visitors from trying to catch a peek of its fading beauty.

According to Reuters, the 16-room building formerly had latticed windows, intricate carvings, a balcony, and an inside garden with fruit plants.

It is currently in disrepair, much like many of the about 2,500 old homes still standing in Baghdad. The buildings, a part of the city’s architectural history, have suffered from years of political unrest, neglect, skyrocketing real estate prices, and a lack of funding.

According to Dhikra Sarsam, a founder member of the Burj Babel Initiative, which aims to preserve the cultural past of the Iraqi capital, “This is one of the most significant remaining heritage residences.”

The home, constructed around a century ago, had been left in a state of deterioration for many years, according to one of its owners, civil engineer and consultant Faiz Falih Al-Qassab.

He claimed that under former President Saddam Hussein and up to 2015, the property was designated as the location for an opera house. However, the opera house was never constructed at that time since renovations were not permitted.

From his residence in the neighbouring country of Jordan, where he has preserved vintage furnishings taken from the Baghdad property, he declared, “Now it is too late to renovate.”

Sarsam strives to spread awareness about the importance of preserving ancient Baghdad from her home, next to Qassab’s historic residence.

Listed buildings cannot be demolished by their owners, and the government may offer loans or subsidies for renovations if necessary. But according to Sarsam, the government “is not committed to this at the time.”

According to Mohammed Al-Rubaye, head of media and public relations at the mayoralty of Baghdad, “There is, however, no cash given to support proprietors.”

The government of Baghdad rebuilt Al-Mutanabbi Street, a landmark in Baghdad that is bustling with bookshops and artists, last year with assistance from UNESCO. However, the neighbourhood’s residential lanes are littered with dilapidated houses, and “shanasheel,” beautiful wooden balconies, are in disrepair.

According to Rubaye, owners occasionally flood or set fire to listed buildings to get around the prohibition against dismantling them.

The motivation is obvious: selling land for development is profitable, given Baghdad’s high real estate costs.

The recent relative peace in Baghdad and the rise in oil prices since the COVID-19 pandemic’s onset in 2020 have created a favourable environment for the city’s real estate sector.

When neighbours phone to express concern about a prospective demolition, Sarsam often rushes to the scene.

Sarsam points out indications of fire colouring its disintegrating interior walls as she passes the remnants of a 1930s mansion in Baghdad’s Abu Nawas Street, which runs along the eastern bank of the Tigris.

It undoubtedly did not collapse on its own, according to Sarsam. Instead, she alerted the authorities, and they surrounded the building to prevent demolishing it. Its future, though, is still unclear.

“This is a significant loss for Baghdad’s past,” she said. Each house that collapses causes a portion of Baghdad to lose its identity.

Inflation impact: UAE shoppers decide to cut back on clothing