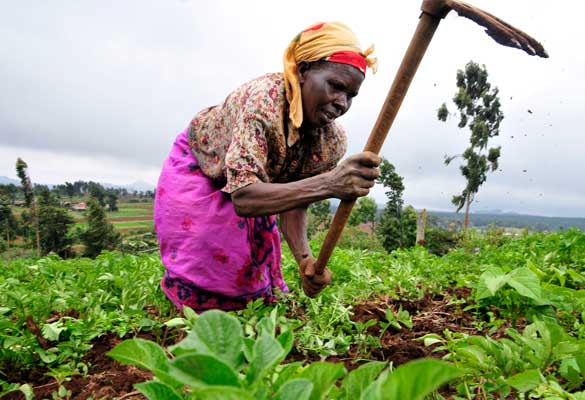 Ghana, like many other developing countries in West Africa’s tropical zone, is witnessing the effects of climate change, which include erratic rainfall patterns, rising temperatures, and an increase in the frequency of catastrophic weather events such as floods.

According to the United Nations Environment Programme (UNPE), climate change has an impact on agricultural production in Ghana, particularly in the north. Climate change is anticipated to make rainfall patterns more unpredictable and erratic, raise the mean temperature by 1.5–5.2°C by 2090, and raise the sea level by 34.5 cm by 2090.

This will almost certainly have major consequences for Ghana’s agriculture industry, which accounts for 54% of the country’s GDP.

Agriculture employs more than half of Ghana’s workforce, which has been negatively impacted by climate change. Crop cultivation has proven to be one of the country’s most climate-sensitive industries. Ghana’s temperature has risen by 1.0°C in the last 60 years, according to estimates.

This has severely harmed food output in northern Ghana, a region that has long been disadvantaged and plagued by poverty and starvation. Farmers in northern Ghana face changing and increasingly unpredictable rainy seasons as a result of their over-reliance on rainfall.

Ghana, like most other Sub-Saharan African countries, is mostly agrarian, with crop production serving as the primary source of income. Smallholder farmers account for more than 80% of growers, and their methods are typified by low labour input and low technology utilization, high reliance on rain, and poor irrigation uptake.

In Ghana, less than 2% of arable land is irrigated in any way. As a result, Ghana’s over-reliance on rainfall amount and pattern for crop production exposes the economy and livelihood of inhabitants to production fluctuations.

Climate change has increased the unpredictability of weather, which has compounded the problem. The 1983 drought is one such example that reduced cereal production by 15%, resulting in widespread poverty, starvation, and mortality.