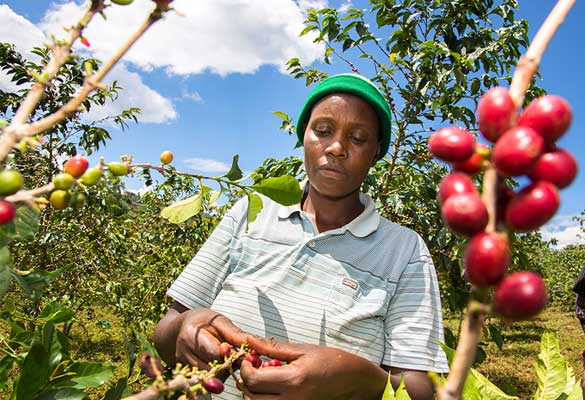 Coffee farmers in east Africa are suffering from droughts, unpredictable rains, and rising temperatures that bring pests and disease. Warming weather is creating havoc on one of the region’s most valuable export crops which is worth $2 billion annually.

Overheating coffee shrubs also foreshadows trouble for other important crops like tea which is Kenya’s main export. If coffee becomes more expensive or less tasty, it will affect not just growers, but a large portion of the world’s population, which consumes 3 billion cups of the beverage every day, at a cost of nearly $200 billion per year.

The world’s best Coffee arabica is grown on the fertile slopes of Mount Kenya. According to a recent peer-review paper, global warming may reduce the total area suitable for growing Arabica beans by half by 2050. Rising temperatures may make some additional regions ideal for coffee cultivation since they boost the maximum height at which the crop can be grown.

Arabica plants thrive at altitudes of 1,000-2,000 meters in tropical climates and temperatures of 18°C to 21°C, accounting for around 60% of global coffee production and more than 98% of Kenya’s. According to Patricia Nying’uro, a climate scientist at Kenya’s Meteorological Department, average temperatures in some of Kenya’s coffee regions have already climbed by 1.1°C in the last 60 years, reaching daytime highs of 25°C.

Despite the fact that coffee is just Kenya’s fourth-largest export, it is a lifeline for rural Kenyans. According to Kenyan government figures, the industry employs over 6 million people directly or indirectly. That’s more than a tenth of the 54 million people in the country. On tiny plots of 0.16 hectares, smallholder farmers grow 65 percent of Kenya’s coffee.

How wearable tech is the new way of treating disease

Bill Gates on how to prevent the next pandemic