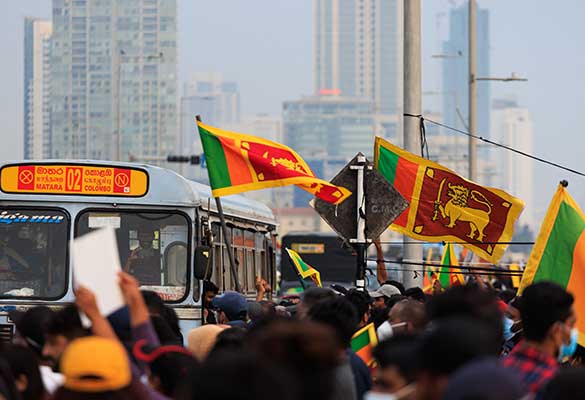 People across Sri Lanka are waiting in lines outside Sri Lanka’s Immigration and Emigration Department headquarters for two days, in the hope to get a passport. The lower class population is the most affected who are looking for ways to leave the country which is currently going through a multi-dimensional crisis.

One such case is of a garment worker, 33-year-old Lenora who plans to work as a maid in Kuwait after her husband was laid off from a small restaurant where he used to work as a cook.

She earns about 2,500 Sri Lanka rupees a day and with two children it is very difficult to manage the house.

On June 11, she boarded a train from the town of Nuwara Eliya, in Sri Lanka’s central hills, and traveled to the commercial capital, Colombo to submit her papers to apply for her passport.

She mentions how in the queue she met laborers, shop owners, farmers, public servants, and housewives. Some of them even told her that they had camped out since the previous night. All of them stated that it was the worst financial crisis they had ever experienced in several decades.

As per government data, Sri Lanka granted 288,645 passports in the first five months of 2022, compared to 91,331 in the same period the previous year.

After economic mismanagement and the COVID-19 pandemic wiped out its foreign exchange reserves, the island nation of around 22 million people is running out of food, cooking gas, gasoline, and medicine.

Currency depreciation, more than 33% inflation, and concerns about long-term political and economic uncertainty are driving many people to migrate.

People from Immigration and Emigration Department mention that at least 3,000 people every day are dropping off their forms and with only 160 members of staff. It has become very difficult as they become very exhausted.