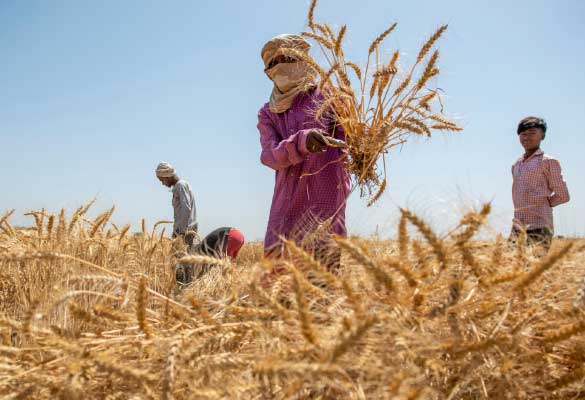 As the end of the war in Ukraine is seemingly out of sight, Egypt which is highly dependent on wheat imports from the conflict-ridden region is set to import the staple crop from India. For context, the desert nation imported $2.4 billion worth of wheat from the two nations in 2020.

Other than India, Egypt is in talks with countries like Argentina, France, and the US as the price of wheat has risen globally mainly due to the war, according to Reuters.

Wheat being the key ingredient for making bread is politically sensitive in Egypt. There have been instances of political instability and erosion of popular support of regimes on the occasion of rising bread prices.

This deal was finalized when Indian Commerce and Food Minister Piyush Goyal met the Egyptian Minister of Economic Development Hala El-Said on March 28 in Dubai. Until now India was exporting wheat to countries like Sri Lanka, Bangladesh, the Middle East, Yemen, Korea, the Philippines, Nepal, and Indonesia.

According to reports, as the world is reeling under a shortage triggered by the war and unprecedented droughts in many parts, India’s granaries are full following a record harvest year. The exports, other than avoiding a humanitarian crisis, will also ease prices across the globe.

India can potentially export 12 million tonnes of wheat in the coming 2022-23 financial year, according to a Bloomberg survey. In comparison, the US had shipped only 8.5 million tonnes in 2021-22.

In light of the crisis, India is also looking to expand its wheat export market to other parts of North Africa, which are heavily dependent on Russian and Ukrainian wheat. Turkey and Nigeria are the next on the radar of India for wheat export.