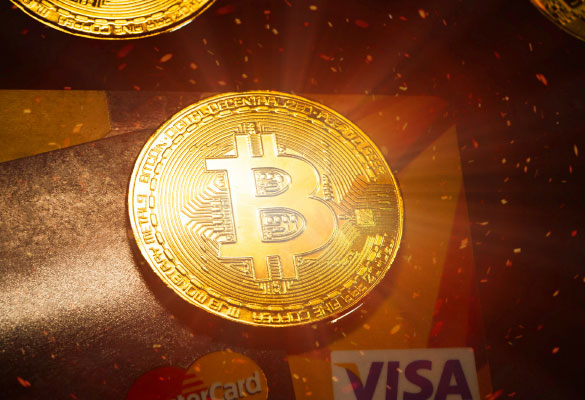 Cryptocurrencies such as bitcoin are becoming popular in Egypt despite looming uncertainties triggered by the coronavirus pandemic. Research has found that the downturn has in fact resulted in a spike in interest in bitcoin among Egyptians. With the global economy entering a recession and economic activities coming to a halt, a higher ratio of Egyptians are seeking the benefits of trading and mining bitcoin as an alternative source of income. The increasing interest in bitcoin is also to do with the fact that it is one of the first cryptocurrencies that came into existence, and it is also increasingly popular compared to other cryptocurrencies. Bitcoin awareness reached an all-time high in 2020, according to Google Trends data. However, when it comes to African countries, Kenya, Ghana, and South Africa accounted for significant P2P increases in 2020 than Egypt.

The pandemic has resulted in more than half a million Egyptians losing their jobs, according to the Egyptian Central Agency for Public Mobilisation and Statistics. With the unemployment rate reaching 9.6 percent in the second quarter of 2020, new job opportunities are becoming increasingly difficult to come by. It is reported that an estimated 16,000 Egyptians have joined the Bitcoin Egypt Community during the period. Although cryptocurrencies were banned in Egypt last year the Central Bank of Egypt (CBE) announced that it is working on a draft law that will only ban the creation, trading, or promotion of cryptocurrencies without a licence. The move is significant because it highlights the progressiveness of the government to work towards legalising cryptocurrencies, understanding its potential and the role it will play in the future.

Egypt’s surging interest in bitcoin is attributable to recession

To further understand the reason behind the surging interest in bitcoin among Egyptians, Dmytro Volkov, CTO of a leading crypto exchange CEX.IO, in an exclusive interview with Global Business Outlook, said “The Covid-19 pandemic has been one of the main factors that has pushed the Egyptian economy into recession. Given the nearly 10 percent spike in unemployment across the nation, it appears that Egyptians are turning to cryptocurrency to invest their assets and hedge them against risks during these uncertain times.”

CEX.IO was one of the first platforms to make fiat-to-crypto transactions accessible by offering card payments and bank transfers to the clients. It provides a rich variety of trading tools for bitcoin, bitcoin cash, ethereum, ripple, stellar, litecoin, tron, and other crypto-assets, and it has a strong presence in the Egyptian market. “As more than half a million people have lost their jobs and lockdown measures force them to stay at home, they are using their spare time to navigate into this new asset class. Therefore, a combination of unemployment and recession are the main reasons behind the recent spike in demand for bitcoin mining and trading in Egypt,” Dmytro Volkov said.

Another possible reason for the spike in interest for bitcoin in Egypt could be based on the fact that brokers have gained more legitimacy. Brokers in Egypt can now guarantee the balance of the customers as they are affiliated with larger networks such as VISA and MasterCard. Earlier, the infrastructure was not very supportive, but things are changing, thanks to the change in stance among the authorities. But there are rising concerns because this group can be an easy target for fraud due to lack of proper legislation. However, new laws are being drafted which will provide more clarity on the legalities related to cryptocurrencies.

When Facebook announced the launch of its stablecoin Libra, it received a lot of attention from industry experts, critics, traders, regulators and governments across the world. The stablecoin promises seamless functions where its users will also be able to pay bills, share tabs in restaurants and ride local public transport when Libra is legalised. While Libra is a cryptocurrency like bitcoin, it is not volatile in nature. Given Facebook’s positioning as a platform used by billions of people, the company has somewhat enhanced the popularity of cryptocurrencies. With more than 2.5 billion users from around the world, Facebook’s Libra has definitely played a part in promoting interest in cryptocurrencies, not only in Egypt but for the rest of the world.

In this context, the country is making significant progress, but its efforts have a long way to go to catch up with the UAE. After observing the UAE’s success on this front and how the emirate has implemented cryptocurrency regulation, Egyptian legislators were inspired to reconsider their cryptocurrency ban. In addition to their willingness to reconsider the legality of cryptocurrency, Egypt is also considering the development of a digital version of the Egyptian pound. Many countries such as China and Japan are pushing ahead with significant investments in Central Bank Digital Currencies (CBDCs). In the near future, we could see more and more countries launch projects for their own CBDS, including Egypt.

Even the Kingdom of Saudi Arabia which runs on Sharia Law has also upgraded its cryptocurrency policies, especially pertaining to remittances. Iran has also brought in reforms to its cryptocurrency laws, and it has officially permitted the mining of bitcoin, which rose to notable levels. In Lebanon, citizens continue to buy and use cryptocurrency even though its trading remains illegal because they prefer to hold bitcoin over their local currency. Although cryptocurrencies remain banned in wealthier economies in the GCC region such as Kuwait, Qatar and Oman, they are now considering a change in their cryptocurrency policies—and it is only a matter of time before new reforms are introduced.

Previously, Egypt saw cryptocurrency as a threat to the economy on the back of its volatile nature and as a result, it had banned all cryptocurrencies under Islamic Law. Following that, Shawki Allam, the current Grand Mufti of Egypt, issued a ban in early 2018. At the time, he said that the technology could undermine the legal system and lead to instances such as tax evasion, money laundering and other fraudulent activities. On the contrary to this move, Egypt introduced a bill that gave the board of directors of the Central Bank of Egypt (CBE) the right to regulate cryptocurrencies and made it a mandate to acquire licence to operate in creation, trading, or promotion of cryptocurrencies.

“Egypt’s central bank is reportedly preparing to issue a law that legalises this new asset class in January 2021. Although the ongoing global pandemic may have changed the bank’s priorities, this is a significant step towards mass adoption. Since the traditional banking system is not doing particularly well these days, Egyptians will likely be more attracted to Bitcoin,” Dmytro Volkov said. “The pioneer cryptocurrency gives them the opportunity to eliminate the procedural bottlenecks that plague traditional financial services and generate an income. Such benefits have catapulted Egypt to be amongst the top ten countries with the highest cryptocurrency activity in Africa. This is a clear sign of the high potential that this new asset class has to act as competition to the banking system in the nation. And if the economic disaster caused by Covid-19 continues to increase, Egypt could become the cryptocurrency hub in the region.”

Pointing to the fact that cryptocurrencies have a bright future not only in Egypt, but also across Africa, Dmytro Volkov further explained, “Different countries in the region, including Egypt, Ghana, Malawi, Mozambique, Nigeria, Zambia and Zimbabwe, currently have a double-digit inflation rate. Therefore, the acquisition power of their respective sovereign currencies is deprecating over time. For instance, if a bottle of water currently costs around 3.4 Egyptian Pounds, tomorrow the same bottle could be sold for 4.08 Egyptian Pounds. Based on this fact, the future of Bitcoin and cryptocurrencies in general looks bright in Egypt and Africa as a whole. As seen back in 2015, when Zimbabwe’s inflation skyrocketed, citizens of these countries will likely flock to transact in crypto as opposed to their local currencies, if the economic crisis worsens. Consequently, the adoption rate of this new asset class will continue to rise over the years to come.”

Is Africa on the brink of a crypto revolution?

It is observed that there is tremendous interest in cryptocurrencies not only in Egypt but across Africa. Many experts believe that the technology is disruptive and they expect it to bring significant changes to the continent. A report published by Arcane Research noted that Africa is one of the most promising regions for the adoption of cryptocurrencies. The report highlighted that bitcoin and cryptocurrency ownership rates in South Africa and Nigeria stand at 13 percent and 7 percent, respectively, which is significantly higher than the global average of 7 percent. The fact that cryptocurrency is not bound by geography and is internet-based adds to its advantage.

The good news is: Cryptocurrencies, whether regulated or not, do not need middlemen, and transactions rely on the internet. This means cryptocurrency transactions can be carried out in any part of the world which gives a global competitive advantage over any other form of money or payment facility—and Africa is well-positioned to capitalise on this. Emerging economies in Africa such as Nigeria, Kenya and South Africa are already witnessing a surge in cryptocurrency popularity. The fact that the population on the continent is growing at a fast rate, alongside technology savvy professionals and entrepreneurs is a boost to the cryptocurrency development. Technology savvy Africans have quickly adapted bitcoin as it helps them get a better value for the dollar compared to weaker local currencies. The success of mobile money in Africa already indicates that the populace is not conservative toward a new financial disruption.

The use of bitcoin is booming in Africa and it is driven by small and medium-sized enterprises as well as remittance payments. It is reported that monthly cryptocurrency transfers to and from Africa of under $10,000, which is typically made by individuals and SMEs increased by nearly 55 percent year-on-year to reach $316 million in June. The majority of the cryptocurrency activities in Africa are taking place in Nigeria, South Africa and Kenya.

Assessing risks should be the first step to legalising cryptocurrency

Despite Egypt’s tremendous efforts to adopt cryptocurrency, it is important not to be blindsided by the progress made by the UAE or Nigeria. Cryptocurrencies come with their own set of risks and Egypt must mitigate them before fully venturing into the world of cryptocurrency. This is especially important because bitcoin still remains unregulated in many countries and it functions without any safety nets. For many, converting local currencies to and from bitcoin relies on informal brokers because it is highly volatile and the process of buying and selling is complex—which further necessitates technical knowledge in its trading. Against this background, Egypt must deal with the legal aspects of it and establish a clear understanding of whether it recognises cryptocurrency as a legal tender, or not. For now, there are thousands of different cryptocurrencies in the world, with the most popular ones being bitcoin, ethereum and ripple. Since cryptocurrency is intangible and stored digitally in a wallet, it carries underlying risks such as cyber extortion, market manipulation, fraud and other financial complexities. There is also mounting fear in the use of cryptocurrency as it has potential in financing terrorism.

Therefore, the country must assess all the risks associated with cryptocurrency and how legalising it will impact the economy, investors and citizens. Another reason for concern here is that a majority of the country’s cryptocurrency-related assets or even companies are very much under-insured or even uninsurable by today’s standards. In short, there is a stigma attached to the technology which has encouraged countries to impose a ban on its use. That said, Egypt should capitalise on its rising interest in bitcoin while keeping these factors in mind. Implementing the right policies and fully understanding the highs and lows of cryptocurrency will allow the country to emerge as a trading hub in the region.

A trailblazing approach to fund management