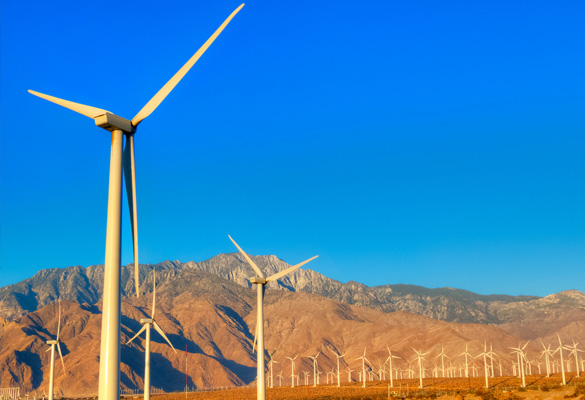 The Ministry of Energy of Saudi Arabia announced the start of the trial operation of the first turbine in the Dumat Al-Jandal wind farm project in the northern Al-Jouf region, according to media reports. The project is all set to become the largest wind farm in the Middle East and once it is fully operational, it will reduce CO2 emissions by nearly 1 million tons annually and supply 72,000 homes with clean energy.

It is also said to be the first project of its kind that comes within the framework of the ambitious plan of producing 50 percent of the electricity in the Kingdom from renewable energy sources by 2030. This project is also in lines with Saudi Vision 2030.

The Dumat Al-Jandal plant is located in Al-Jouf emirate, 900 kilometers northwest of Riyadh and the 400MW onshore wind farm will also be Saudi’s utility-scale wind power source. The turbines are equipped with towers, blades, and nacelles, which will be assembled at the project site. The project will also include 99 Vestas wind turbines, each with a hub height of 130 meters and a rotor diameter of 150 meters.

It is being developed by a consortium of EDF Renewables and Masdar under an award by the Renewable Energy Project Development Office (REPDO) at the Ministry of Energy. The wind turbine project is also going to contribute $150 million to the country’s gross domestic product (GDP). The plant is expected to be completed by 2022.

The project will also benefit from a 20-year power purchase agreement (PPA) with the Saudi Power Procurement Company. The project is estimated to cost around $500 million and after its completion, the station will be able to generate sustainable energy sufficient for about 70,000 housing units.

Kenya Airways to lay off a significant number of employees