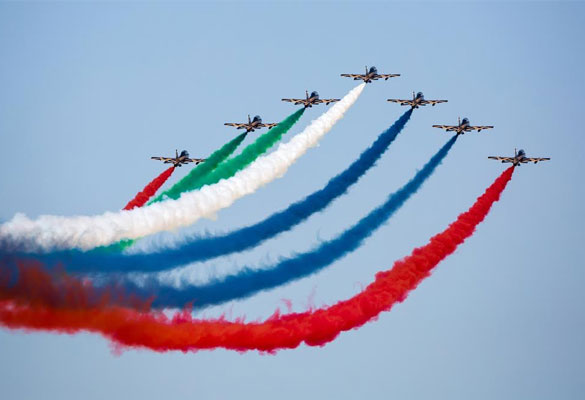 The biggest aviation event in the world since the Covid-19 outbreak, the Dubai air show 2021 finished on Thursday with more than $78 billion worth of commercial and defence contracts signed during the show, according to media reports. The five deals signed during the 2021 show easily surpassed the pre-pandemic 2019 levels that saw deals worth $27.24 bn.

The brilliant display of the air show took place at the Al Maktoum International Airport at Dubai World Central from November 14 to 18 and it attracted 1,200 exhibitors with 371 new companies. Around 148 countries took part in the event with 13 newcomers. These statistics further solidified the event’s status as a major global event. Additionally, the show also featured more than 160 of the world’s most advanced aircraft on the ground and in the air.

The Dubai airshow event was primarily dominated by European aerospace company Airbus with a total of 408 aircraft orders, out of which 269 were firm and 138 were commitments.

During the inaugural event, Indigo Partners portfolio airlines placed a firm order for 255 Airbus A321neo Family aircraft priced at $33 billion, the biggest ever order placed at the five-day airshow. Additionally, US-based Air Lease Corporation also signed a contract for 111 aircraft covering the full range of Airbus aircraft families including the new A350 Freighter priced at $15 billion.

The third day of the show saw Jazeera Airways order 28 A321neos. Along with this, Nigeria’s Ibom Air became the latest Airbus customer with a firm order for 10 A220s. US-based aircraft Boeing bagged a few orders too and also signed an agreement to sell two freighters with Emirates SkyCargo, a deal with Air Tanzania for four aircraft and defence deals with several UAE-based companies.