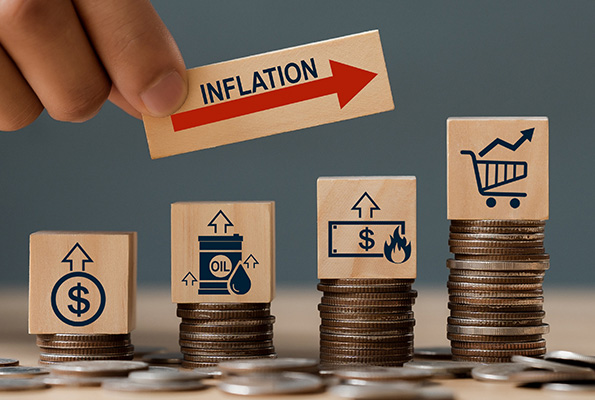 Demand-Pull Inflation
Demand-pull inflation happens when the demand for a certain commodity or service exceeds the economy’s capacity to supply it. There is upward pressure on prices when this demand exceeds supply, which results in inflation.

A practical example of this would be tickets to watch Hamilton live on Broadway. Due to the restricted availability of seats and the outsized demand for the live performance, ticket prices on third-party websites soared, surpassing USD 2,000, significantly higher than the then-current basic ticket price of USD 139 and premium ticket price of USD 549.

Cost-Push Inflation
Cost-push inflation is an increase in prices brought on by rising labour and material costs. Consumers frequently pay more for these goods and services as a result of these costs being passed on to them.

Lumber is a good example of this as lumber is an input good for houses. In 2021 when the cost of lumber spiked as much as 400% it impacted the rising housing prices which resulted in inflation.

Inflation may occur if the money supply grows more quickly than the pace of output. This is especially true in the case of demand-pull inflation, which occurs when there are too many dollars competing for too few goods.

Typically, the Federal Reserve will use a procedure known as “Open Market Operations” (OMO) to raise the amount of money in circulation.

Devaluation
Devaluation is a downward adjustment to the exchange rate of a nation, which lowers the value of that nation’s currency. A currency’s depreciation lowers the cost of exports, which encourages other countries to purchase more of the devalued items.

Devaluation also raises the price of domestic goods in the depreciating country, which encourages its inhabitants to favour native goods over imports. As the United States and other countries have regularly accused China of trying to depreciate the Yuan over the years, China is likely best known for this technique.

Rising Wage
Rising wages is precisely what it sounds like: an increase in the amount that employees are paid. Susane L. Toney, Ph.D, endowed chair of Business and Economics at Hampton University said, “Wages are a cost of production. If wages rise a large amount, businesses will either have to pass the cost on, or live with lower margins. The exception is if they can offset wage growth with higher productivity.”

However, some economists remain mixed on the impact of gradual increases in wages, like raising the minimum wage, compared to faster, more sudden wage growth seen in places like Silicon Valley.

Some think that cost-push inflation, or price increases that are driven by costs to businesses, could result from pay increases, while others think that demand will rise enough as a result of increased wages generally, rather than simply concentrated in certain industries, to counteract price increases.

Policies & Regulations
Certain policies may cause cost-push inflation or demand-pull inflation. Demand may rise when the government provides tax breaks for particular goods. Costs could increase if supply is less than demand.

Furthermore, strict building codes and even rent stability laws may unintentionally raise prices and foster inflation by passing those costs forward to citizens or artificially decreasing the availability of housing.

Majority of internet users do not password-protect WiFi