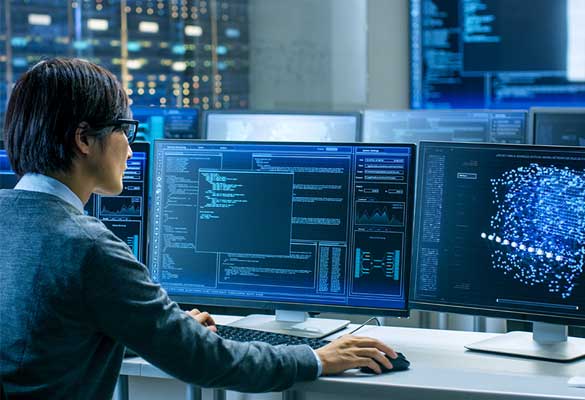 Imagine a ﬁnancial network where institutions (banks, companies, etc.) hold a number of assets as well as part of the other institutions in the network.

Could a small change in asset value cause a massive drop in the market value of the institutions? Or, in other words, could there be a ﬁnancial crash?

At present, we mainly rely on empirical or statistical tools to answer this question. It is not clear that these methods can systematically and reliably predict ﬁnancial crashes, because indicators of a crisis generally fail at predicting the subsequent crisis.

Our failure to prevent these events is directly responsible for economic crises and their devastating consequences.

This was recently shown to be a computationally unmanageable problem. Financial crashes are inherently difficult to predict, even for a regulator who has complete information about the financial system.

The impact of the COVID-19 pandemic has shown that accurate and timely assessment of risk remains a serious challenge for financial institutions.

Even before the events of 2020, the last two decades have seen financial and economic crises that led to rapid changes in how banks and other market participants assessed and priced the risk of different asset classes.

The Bank of Canada is desperately moving ahead regardless and recently hired the quantum outfit Multiverse Computing to look into the question of whether a quantum computer could predict a financial crisis in Canada.

The only problem, according to Multiverse CTO Samuel Mugel, was that “the Canadian economy, in their view – and I hope it’s true – is too stable to have a high likelihood of financial crashes. So basically, they said any financial crash we predicted would probably be wrong.”

In other words, the central bank was far smarter than any of those new-fangled quantum devices. But while this sounds like great news for Canadians, you don’t need a quantum computer to realise that the Canadian economy is not as stable as the bank thinks.

What does Quantum mean?
Quantum is a Latin word that means “how much?”

This word is usually used in Canada in many situations like if anyone looks at the price of a Home or any other asset.

The common story about the prices in the real estate sector is that they are for sure the outcome of supply and demand. Canada has filled up with a lot of outsiders, and they are not building their residences fast enough.

Unfortunately, Freeland is using the wrong kind of maths. Demographics are unable to provide enough clarification on price rises in real estate.

In the five years from 2016 to 2021 the Canadian population grew by 5.2%, whereas house prices went up by around 10 times, which shows a gap between the estimates projected with the help of demographics and math calculation, and the actual result.

As argued in a book named ‘Money, Magic, and How to Dismantle a Financial Bomb’, which applies the tools of quantum probability to the financial system, money has a dual – real and virtual nature and relies on an unclear and unsteady link between value and price.

In particular, money creation through loans is a dynamic process that can lead to rising asset prices. As the value of a ‘real’ home increases, so does the amount of virtual money which can be created, however, the two are always linked.

But, this principle can work in both directions – money (and value) can be destroyed as easily as it was created.

Real estate bubble: A reason behind inflation
Since house prices in Canada have been on a steady march upwards for three decades, hardly reduced by the 2007–08 financial crisis, most Canadians have become accustomed to the idea that prices can only go up.

After all, immigrants need to live somewhere. But what is less often observed is that mortgage interest rates have also been fairly and steadily moving downward over the same period.

This meant not only did the existing mortgage holders see their payments decline with time, but the new buyers could afford to pay more for the same house.

In many countries around the world, house price growth has been encouraged by the government and central bankers. Because it serves as a partial replacement for real income growth.

In July 2020 Bank of Canada Governor Tiff Macklem even went out of his way to announce that “our message to Canadians is that interest rates are very low and they’re going to be there for a long time. If you have got a mortgage or if you are considering making a major purchase, or you are a business and you are considering making an investment, you can be confident as rates will be low for a long time.”

Unfortunately, inflation – initially considered ‘temporary’ – started to spike in 2021 and then exploded higher, taking interest rates with it.

We don’t need a quantum computer to tell us that the Canadian economy – like many others around the world – is looking less stable as compared to its previous appearance. But what needs to be updated is our financial mathematics.

Will Australia embrace a new market due to Chinese trade restrictions?