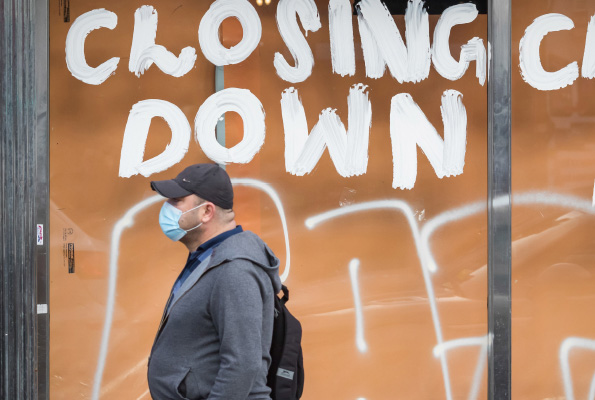 Britain may witness a summer recession, according to a section of economists. The country had recovered from the recession of the first two quarters of the 2020-2021 financial year and was beginning to gather some steam. But a double whammy of high inflation and stagnant wages has meant that the ugly head of the recession is likely to pop up yet again. Experts fear that currently, the former imperialist superpower is seeing the lowest household savings in more than 70 years. And the same will trigger an inevitable curtailment of non-essential spending.

The economy is currently tending to the blows of two major factors, experts say. The first being the fallout of the Russian invasion, and the second was a much-muted recovery from the pandemic-induced slowdown. And the UK, currently being an economy that is largely powered by consumer spending is likely to suffer inevitably until the prices cool off.

By some estimates, the British economy will see growth stunted for at least the next two quarters, which will technically mean a recession after which the economy is expected to see positive growth.

As stated, the current crisis stems from the subdued recovery of the UK economy following the relaxations of the COVID-19- induced lockdown norms had economists worried. On top of that, the highest recession in 30 years triggered due to the Russia-Ukraine war had meant that discretionary spending is a null possibility for economically fragile households. In real terms, the wages currently in the UK are lower than that during those in the 2008 financial crisis, according to many estimates.

The situation is so critical that even a single day additional bank holiday on account of the Queen’s 75th birthday in June will lead to reduced economic output. Further, in the health sector reduced transactions in the form of lower interest in getting booster doses for the COVID-19 vaccine will contribute to this negative expansion.

Sensing the same sentiment, Bank of England Governor Andrew Bailey has suggested that the central bank will now try to balance this critical situation by much less aggressive rate hikes than previously thought. While speaking at the sidelines of the spring meeting with officials of the World Bank, International Monetary Fund, and all member nations in Washington, he suggested that a more graduated rate hike will be carried out to contain the possibility of a recession. This is because on one hand, the BoE is concerned about demand-driven shortages and on the other, a drop in disposable incomes due to staggering inflation of basic goods and services will see a contraction in consumer spending.

Falling incomes, consumer spending
According to some experts, this cost of living expense has surged due to the policies of the Boris Johnson government. The most prominent among them is the massive hike in national insurance costs which have been implemented. Along with this, which will hurt ordinary UK citizens is the four-year freeze of personal taxes meaning those within the lower end of the salaried class will effectively shell out on taxes than on their discretionary spending.

But in April, the situation has only worsened with 40% of UK households are expected to fail to afford proper heating for their homes in the winter, according to energy providers.

“Inflation is set to peak close to 9% in April and probably won’t fall below 7% this year,” noted James Smith, Developed Markets Economist for ING bank.

As a result of these, Multiple studies have suggested that the levels of consumer confidence have fallen to the lowest in as much as 50 years.

The UK official data showed that consumer retail sales fell by 1.4% on a month-on-month basis in March and the same is feared to deteriorate further. The study was carried out by the Office for National Statistics. This included the sale of essential items like food and petrol. The figures said that close to 20% of the surveyed population feared that they will be forced into debt in 2022 while almost half of them will not be able to save anything for the next year. Another key finding of this survey was that 23% of those surveyed said it was “very difficult or difficult” to pay for household bills, a 6% increase from the same survey conducted in November 2021.

The situation is further likely to worsen as this survey was conducted ahead of the steep rise in energy prices which came into effect in April and other higher costs to the working class.

By the start of April, there was a survey conducted by Nielson that found consumers were underspending on supermarket bills compared to their expenses in 2021 even during the lockdown period. The highlight was that while branded produce saw a contraction of more than 5% in sales, the produce with private labels dropped by close to 2% over the period of the last four weeks.

This meant in total, that consumers were spending an overall 4.1% less on groceries on a year-on-year basis in 2022 which was the biggest drop since the study came into existence.

In mid-April, Tesco, the largest retail chain in the country had forecasted a drop in profits citing higher acquisition costs and retail prices. The company has a hold of more than a fourth of the country’s entire retail market.

All this has also seen the pound taking a hit. The pound fell below the level of $1.29, its biggest fall since November 2020 by the end of April.

Possible way out
Earlier in March, a sense of this situation was foreseen by research organizations like the Resolution Foundation. They had estimated that the incomes of families across the country are likely to fall at a time when already they are burdened with high energy costs. This setback in the aftermath of the Russia-Ukraine war will be the worst since 1975, they said as households’ income may reduce to the tune of £1,000 for the year.

“Taking into account the measures announced by the Chancellor, the typical working-age household faces an income fall of 4%, or £1,100, in 2022-23. But the greatest falls will be felt by the poorest quarter of households who are set to see their incomes fall by 6%. This will see a further 1.3 million people fall into absolute poverty next year, including 500,000 children – the first time Britain has seen such a rise in poverty outside of recessions,” the think tank had said.

As a solution to this, the think tank had called on the UK government to take decisive action to subsidize low-income households who are struggling with their day-to-day expenses and prevent a rise in children growing up in poverty to prevent an economic contraction. They had feared that absolute poverty levels in the UK would deteriorate and the gains made on eradicating poverty will be diminished to 2019-20 levels.

The pandemic forces global insurance to step up its game

How Vietnam is revolutionising solar power

How is Kenya’s real estate developing?