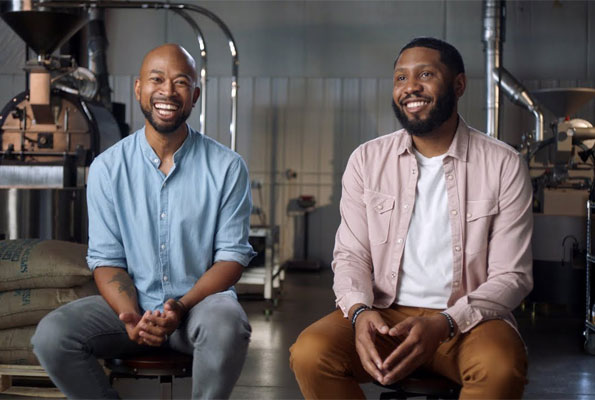 Blk & Bold co-founder Pernell Cezar quips that if he and his business partner Rod Johnson ever have a disagreement, he will call Rod’s mother and tells her to scold him.

Pernell said, “If Rod goes too far out of bounds, I’ll just call his parents.”

There aren’t many business connections where you have the opportunity to accomplish that.

Childhood friends Pernell and Rod, both 33, grew up on the same block in Gary, Indiana, a working-class community.

They founded Blk & Bold, a coffee and tea company, two years ago. It is currently thought to be the US’ first nationally distributed black-owned coffee company.

Black Lives Matter has increased consumer interest in black-owned enterprises, which has helped Pernell and Rod’s sales this year at stockists like Target, Whole Foods, and Amazon.

The two friends, who share a love of coffee, made the decision to start Blk & Bold in June 2018 after working for ten years in various fields.

Pernell had worked at Target, whereas Rod had previously worked as a professional fundraiser for colleges, hospitals, and other institutions.

At Pernell’s house in Des Moines, Iowa, they launched the company with the intention of doing good deeds in addition to selling high-quality coffee and tea. They would donate a portion of their earnings to charity.

The goal, according to Rod, was to take the affection for this daily routine of drinking coffee or tea and make it possible for everybody to take part in the social impact model.

“The essence of what we do is that. We donate 5% of our earnings to organizations that assist at-risk kids,” Rod concluded.

No inflation impact: How has Apple and Amazon performed?