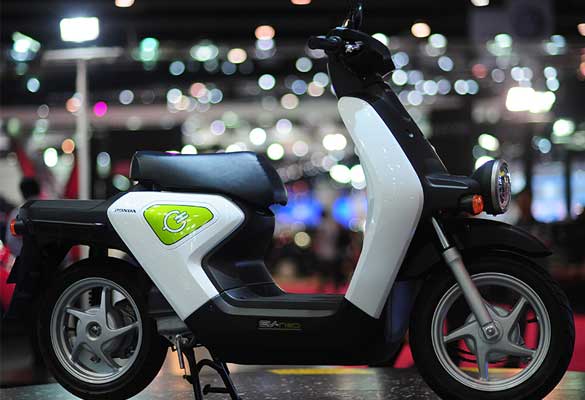 In the UK, the term “electric vehicle” quickly conjures up ideas of a Tesla or a vehicle of a like nature, but throughout Asia, the struggle for electric vehicle supremacy is being waged on motorcycles.

If you travel to the majority of Asian countries, you’ll quickly find that motorcycles are everywhere.

Whether you’re in Cambodia, India, Indonesia, or Taiwan, it’s not unusual to see a two-wheeler carrying an entire family because it frequently performs a similar function to a family car but is much more economical.

In fact, more than half of all motorcycles sold worldwide are from Asia, and it is uncommon for a family not to own a motorcycle in most of these regions.

Thailand is the country that has the highest per-person motorcycle usage. 87% of households have one or more motorbikes. These usually come in the form of scooters, where the rider sits with his or her feet in front.

When it comes to the usage of motorbikes, Vietnam (86%), Indonesia (85%), and Malaysia (83%) come closely behind Thailand. In the largest markets, China and India, the figures fall to 60% and 47%, respectively, but they still much exceed the UK which has a meager 7%.

In Asia, gasoline-powered motorbikes still make up the majority of the market, but transportation experts anticipate a big move to electric bikes soon.

The vast majority of motorcycles in Asia currently run on gasoline, but transport experts believe that a significant transition to electric models is now gaining momentum.

Arushi Kotecha, an automotive analyst at the global research group Economist Intelligence Unit, said, “We see immense scope for growth [in sales of electric motorbikes], especially in Asia, for the following reasons. The first is personal disposable incomes, especially outside China, in markets like India and Southeast Asia, still remain low on average, which makes cars unaffordable.”

“And, especially at a time like this, when food and fuel inflation is so high. That would add to the direct cost of owning a petrol vehicle. Which is why we think that the switch to electric [motorbikes] will be much faster,” she added.

By the end of this decade, Ms. Kotecha says, sales of electric motorbikes in Asia might increase by three to four times their current rate, with a corresponding increase in global demand.

As of today, China is the world’s largest producer of electric motorbikes, most of which are scooters.

One of the biggest producers is Beijing-based NIU Technologies, which launched its first models in 2015. Joseph Constantly, the firm’s director of global strategy, describes the company as “if Tesla and Vespa [well-known Italian scooter manufacturer] had a baby”.

One of the largest makers, Beijing-based NIU Technologies introduced its first models in 2015. Director of worldwide strategy Joseph Constantly compares the business to “if Tesla and Vespa had a baby.”

He claims that although electric motorbikes have been around for a long in China, they were powered by heavy lead acid batteries. According to Mr. Constanty, NIU was the first company in the US to sell electric motorcycles that used the same cutting-edge lithium batteries as those found in a Tesla or your mobile phone.

“So, we really were the first in the market in China, and pretty much globally at that point. And we were able to dive into the space,” he added.

Government incentives and promotion are fueling the sale of electric motorbikes in China as a way to fight urban pollution. On the other hand, the business is essentially beginning from scratch in other countries like Cambodia and Laos.

While some businesses in the industry have towering goals, others have recently had some high-profile issues.

Indian firm Ola Electric grabbed headlines over the past few months after one of its electric motorbikes caught fire.

Okinawa and Jitendra New EV Tech, two other Indian manufacturers of electric motorcycles, have both suffered the same issue recently as well. Faulty batteries have been blamed for the fires in each of these cases.