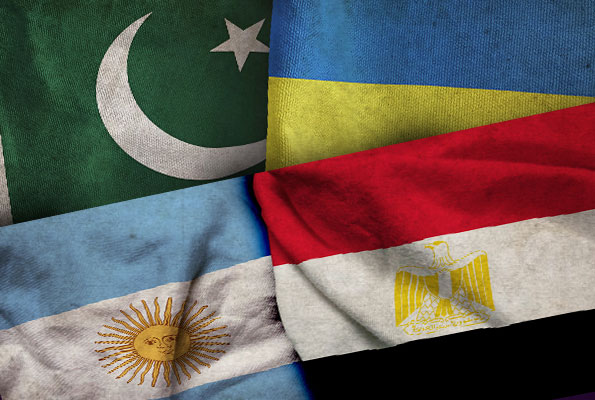 A record number of developing countries are in serious situations right now because of fear of an economic slump, an out-of-control dollar that is at a two-decade high, and depleted foreign exchange reserves.

A Reuters report stated that a record number of developing nations are currently in difficulty as several countries are exhibiting economic malaise similar to Sri Lanka.

Here is the list of countries at economic risk, based on a Reuters report:

Argentina
The nation with the highest rate of sovereign defaults seems certain to raise its total. The peso is already trading at a near 50% discount on the black market, reserves are at an all-time low, and bonds are currently only worth 20 cents on the dollar, or around 50% of their value after the country’s post-2020 debt restructuring.

Even while there won’t be much debt for the government to pay off until 2024, it will start to accumulate, and there are growing concerns that strong vice president Cristina Fernandez de Kirchner may try to persuade Argentina to violate its pledge to the International Monetary Fund.

Belarus
Belarus is now vulnerable to the same severe sanctions that drove Russia into default last month, after standing beside Moscow in the Ukraine campaign.

Ecuador
Only two years after entering debt, the Latin American country Ecuador is now in chaos as a result of violent protests and a coup attempt against President Guillermo Lasso. As the government is subsidizing food and fuel, JPMorgan has raised its forecast for the public sector fiscal deficit to 2.4% of GDP for 2022 and 2.1% of GDP for 2023 due to the country’s high debt. Bond spreads have topped 1,500 basis points.

Egypt
Egypt has seen one of the greatest outflows of foreign capital this year, according to JPMorgan, totaling around USD 11 billion, with a debt-to-GDP ratio of about 95%.

According to money management firm FIM Partners, Egypt will have to pay USD 100 billion in hard currency debt over the following five years, including a sizable USD 3.3 billion bond, in 2024.

Cairo depreciated the pound by 15% and asked the IMF for assistance in March. However, since then, bond gaps have increased to over 1,200 basis points, and credit default swaps (CDS), a tool used by investors to manage risk, now take a 55% likelihood that Cairo will miss a payment into account.

El Salvador
After El Salvador declared bitcoin legal tender and shut the door on IMF hopes, the country is in a deep economic crisis. USD 800 million bonds with a six-month maturity trade at a 30% discount, and longer-term bonds at a 70% discount, indicating that investors’ confidence has declined to this amount.

Ethiopia
Ethiopia is a financial powerhouse in Eastern Africa and has recently experienced significant economic growth. The capital city, Addis Abeba, is one of the richest in the world and is listed as the ninth richest city in Africa.

Addis Abeba, however, will be among the first countries to benefit from debt relief under the G20 Common Framework initiative. Although the protracted civil war in the nation has hindered development, it is nonetheless making interest payments on its sole USD 1 billion international bond.

Ghana
The debt-to-GDP ratio in Ghana has increased to about 85% as a result of irrational borrowing. Its currency, the cedi, has lost approximately a quarter of its value this year, and it has already spent more than half of its tax revenue on debt interest payments. In addition, inflation has increased by 30%.

Kenya
Kenyan income is utilized to pay interest on borrowing to the tune of 30%. This scenario is significant because it now has no access to the capital markets and has debts with a 2024 maturity date worth more than USD 500 million.

Regarding Kenya, Egypt, Tunisia, and Ghana, Moody’s David Rogovic said, “These nations are the most susceptible solely because of the quantity of debt coming due relative to reserves, and the fiscal issues in terms of stabilizing debt burdens.”

Pakistan
As the country is at risk of going through a balance of payments crisis due to growing energy import costs, Pakistan and the IMF secured a significant agreement. Only USD 9.8 billion worth of foreign exchange reserves are left in the nation, barely enough to cover imports for five weeks. The dollar’s rise has further caused suffering for the Pakistani rupee, which has fallen to historic lows. Spending cuts are urgently needed because the new administration in the country has spent 40% of its revenue on interest payments.

Ukraine
The value of the Ukrainian hryvnia relative to the dollar has decreased by more than 5%. Major investors like Morgan Stanley and Amundi warn that Ukraine almost certainly needs to restructure its USD 20 billion or more in debt as a result of Russia’s incursion.

Reserves and aid funds may enable Kyiv to make payments. However, in light of state-run Naftogaz’s request for a two-year debt freeze, investors think the government will do the same.

Young Greeks vs inflation: The battle against surging prices