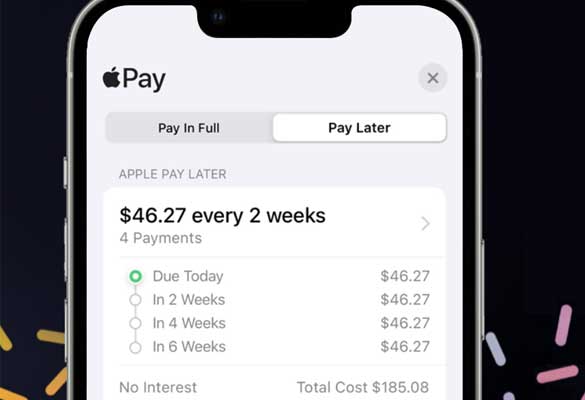 Apple, at its annual Worldwide Developer Conference (WWDC), stated that it would compete with Klarna and ClearPay. WWDC focuses on operating system updates for products like iPhone, Mac, iPad, and Watch.

Here are some of the announcements made at the WWDC:

The company said it would emulate Klarna and ClearPay and adopt the “buy now, pay later” feature for iPhones.

This feature will allow consumers to take up a four-month interest-free loan on any purchases made with the Apple Pay service. The company will also be partnering with Shopify, an e-commerce company, to allow users to track the status of their orders in the Apple Wallet app.

As for the availability, this feature is exclusive to the US with the release of iOS 16.

The company also announced that it would release a new version of the MacBook Air built around its M2 chip. It will come with a new MagSafe charging port, a physical design similar to the larger MacBook Pro..

Apple also claims that the new M2 CPUs are 40% quicker than the previous generation, but they still run without a fan and have an 18-hour battery life. The computers will come with a two-port USB charger and will be available starting next month for $1,199.

It will also update the iPhone’s lock screen, which is the most significant visual update the operating system for iPhones has gotten since the release of the iPhone X.

Users will be able to customize the clock’s design, pin small widgets to the home screen, and also move notifications to the bottom of the screen.