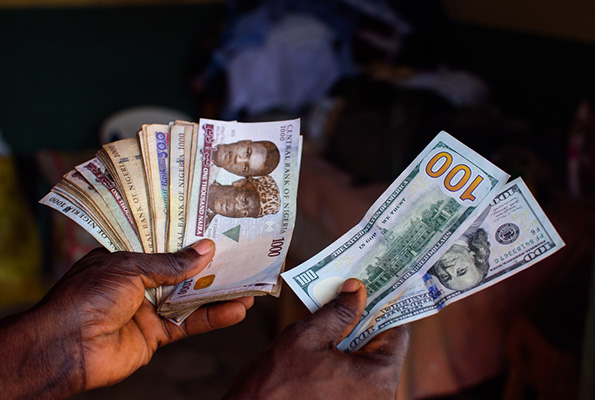 Before the central bank meets to decide on interest rates next week, the statistics bureau said that annual inflation in Nigeria dropped in December to 21.34% from 10 consecutive months of increases.

The central bank of Africa’s largest economy will meet on Tuesday next week to decide on interest rates. However, it has already been stated that if inflation stays high, the rate increases that began in 2022 will be maintained.

The National Bureau of Statistics (NBS) attributed the surge in inflation, which reached 21.47% in November, to a substantial increase in demand before the holiday season, a rise in production costs, and a depreciation in the value of the naira.

The NBS stated in a report that “the increases were recorded in all … divisions that yielded the headline index most especially in food & non-alcoholic beverages, transport and miscellaneous goods & services.”

The food inflation rate decreased from 24.13% in November to 23.75% in December as the most populous country in Africa battled high prices for necessities.

Voters’ top concerns as Nigeria prepares for parliamentary and presidential elections next month—in which incumbent President Muhammadu Buhari will not run due to term limits—involve high inflation, slow economic growth, and rising insecurity.

According to policymakers, Nigeria’s continuing inflationary pressures are structural and primarily imported.

According to statistics agency figures, the price of food, diesel, and the weakening currency contributed to Nigeria’s inflation reaching a 17-year high of 20.5% in August and continued to rise.

Since March 2016, Nigeria has experienced double-digit inflation, but the problem has been made worse by a persistent lack of dollars and pressure on prices from other countries due to the conflict in Ukraine.

According to the National Bureau of Statistics, the cost of staples, including bread, cereal, pork, and other commodities, increased, causing food inflation to surge to 23% in August from 22% in July. The increase, the seventh straight of the year, comes after a 19.6% increase in July.

However, the current dip in inflation has become a great respite for Nigeria’s struggling economy.