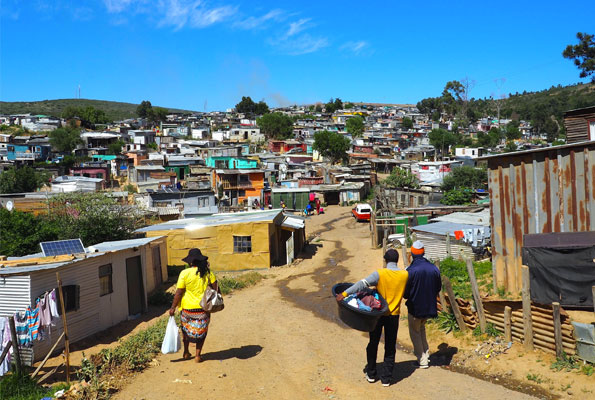 The richest 0.0001% own some 40% of the African wealth. The continent’s three richest billionaire men have more assets than the bottom 50% of the remaining population (650 million people).

While massive reductions in the numbers living on less than USD 1.90 a day have been achieved in Asia, Africa has hardly made any progress. The World Bank estimates that 87% of the world’s poorest will be in Africa by 2030.

Before COVID, several sub-Saharan African economies saw record-breaking growth. Over the past 20 years, Ethiopia and Rwanda witnessed annual growth rates of over 7.5%, which were among the fastest in the world.

However, because income data at the subnational level are occasionally unavailable, it is less certain if the benefits of economic expansion have been distributed fairly among the people.

The statistics demonstrate that till 2010, African countries made great strides toward reducing regional income inequality, contrasting sharply with the rest of the world.

When we looked more closely at the variables influencing regional disparity, we discovered that growth was primarily attributable to advancements in the foundational infrastructure that allowed lagging regions to catch up to national levels more quickly. For example, the number of night lights per person more than doubled in the most underdeveloped areas, with oil-exporting nations and frontier markets like Ghana and Kenya seeing the most significant increases.

For instance, compared to leading regions, access to clean water, power, and cellular services is two to four times lower in lagging areas. It is due in part to the significantly lower public investment per capita. In lagging regions, two to three times fewer people have completed their primary and secondary education.

The disparity is significantly broader in nations with usually inadequate access to public services and unequal distribution. Burkina Faso has leading regions with over 20 times higher access to electricity.

What were the main factors in the recent decline in regional inequality? We discovered four major reasons:

Trade openness: Convergence is supported by more accessible access to international markets, which raises the value of a nation’s resources like raw materials, which are more readily available in underdeveloped areas. Additionally, it increases the number of workers in urban areas, which may cause the income per capita of regions with greater urbanization to drop if infrastructural development and the general rise in economic activity in city centres cannot keep up.

Well-targeted investments: We examined the effect of investments on regional inequality using mineral discoveries as a proxy and discovered that progress is location-dependent. The most probable assets to have an impact by generating jobs and boosting economic activities in underdeveloped regions are those outside capital cities.

What steps may be taken by policymakers to remedy these disparities?

Extreme inequality of wealth is increasing in Africa. Seven of the world’s most unequal nations are found here, making it the second-most unequal continent, in terms of the distribution of wealth.

According to an Oxfam report, the poorest 50% of Africans, or about 650 million individuals, are wealthier than the three richest billionaires on the continent.

Africa is quickly becoming the global centre of extreme poverty. According to the World Bank, 87% of the world’s impoverished people will reside in the continent by 2030.

The majority of underprivileged women and girls are from Africa. The world’s most significant levels of gender inequality are now combining with economic inequality, thus forming a strangling web of exclusion. A boy from a wealthy Kenyan household has a one in three chance of attending a secondary school, as against the 250 girls from low-income families, out of which only one can avail of this opportunity. Most unpaid caregiving and domestic labour are also performed by women and girls. Women in Malawi devote seven times as much time to domestic duties and unpaid care as men.

“Women are disproportionately impacted by climate change due to gender inequalities and gender roles and responsibilities. They are 14 times more likely than men to die in a climate catastrophe and make up 80% of people displaced due to climate change,” observed the Institute for Security Studies in 2022.

“The international community has made strides in recognizing that climate action must consider gender equality. But this year’s United Nations Climate Change Conference (COP27) was another missed opportunity to advance meaningful gender participation,” it said.

Here are the observations from the report:

Because they suffer most from climate change, women are often at the forefront of developing effective mitigation and adaptation strategies. Across Africa, they have emerged as leaders in coming up with solutions such as drought-resistant seeds, better soil management, or guiding reforestation and restoration efforts.

Women still have less autonomy over their decision-making, including migration choices. Gender norms and family responsibilities play a role, and women also have less access to resources and information than men to inform these decisions. In family situations, men are most likely to migrate to earn an income, leaving women to carry the household burden. This involuntary immobility puts women at risk of climate change impacts because they are trapped while caring for households and children.

Yet, migration and urbanization can be effective adaptation measures that empower women. They can increase autonomy, mastery, remittances, and social standing and disrupt gender norms. While women have comprised a steady share of migrants for decades, the number moving independently for work, education or to meet their families’ needs has grown significantly. The number of female international migrants in Africa increased from 6.2 million in 1990 to 10.5 million in 2020.

Africa’s economic future seems bleak. According to the IMF, 24 of the 45 nations in sub-Saharan Africa, including South Africa and Nigeria, are not likely to have a significant economic rebound. Above all, unaffordable debt has returned to burden Africa’s people.

Although there have been some unusual individual examples, there is a significant chance that a continental crisis will impede progress for the ensuing ten years as population growth accelerates.

Spending on public services is already severely restricted by the risky lending practices of Chinese and European financial markets, along with some African governments. For example, in Uganda, debt repayments are at historic highs, and government spending on health and education has been reduced by 12%.

But the narrative isn’t always subpar. African nations as a whole are making progress against inequality. It is a testament to them that they are succeeding despite overwhelming odds and difficulties, and it exposes the many nations that are simply not doing enough.

African nations are now ranked according to how committed they are to reducing inequality.

This study also ranks African countries according to their policies to narrow the wealth gap by considering taxation, increasing social spending, and labour rights. The CRI was produced by Oxfam and Development Finance. It draws a compelling picture. All African nations are struggling with the same toxic legacy, including extreme inequality, a history of expropriation by colonial powers, and frequently failing economic policies imposed by the IMF and the World Bank. However, countries have significant differences in addressing this legacy and closing the gap between the rich and the poor. The CRI demonstrates that African nations can opt for a route toward equal prosperity.

The CRI demonstrates that nations like Namibia and Ethiopia fight inequality with unusual vigour. According to economist Joseph Stiglitz, Namibia is the second-best country in Africa for its government’s efforts to combat economic inequality, which has been steadily declining since 1993. In Africa, it tops the list for dedication to social spending. As a result, investment levels are strong, enabling the government to finance programs like universal free secondary education and recent increases in social safety spending.

Global wealth distribution inequality has gotten much worse over the last few decades.

Additionally, many people do not have access to high-class financial services (i.e., services provided only to accredited investors), which are widely available to wealthier residents. By giving individuals access to a way to make, store, receive, send, and invest their money, cryptocurrencies can help to narrow the wealth gap.

Kuwait’s GDP growth to be GCC’s slowest in 2023