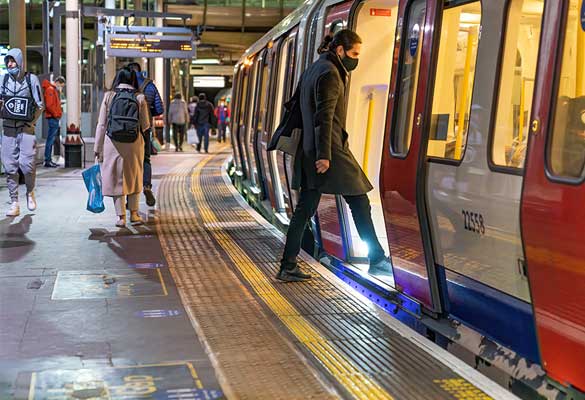 With the COVID-19 pandemic subsiding, the government began operations of a $25 billion metro line on May 24. The Elizabeth line crosses the city and its suburbs in both east-west directions. It will also stop in the financial district, the West End, and Heathrow Airport. The trains running in the tube will be 205m-long.

The daily number of public transport journeys in London has remained stable after COVID-19 restrictions eased in September. The London Underground is roughly three-quarters as crowded as before Covid-19, and buses are roughly four-fifths as packed.

It seems that the travel frequency is gradually going down across the country. Jonathan Spruce, a trustee of the Institution of Civil Engineers, said that people have settled into a new routine vastly different from before the outbreak.

Apart from the difficult-to-measure electric bicycles and scooters, Londoners have reduced their use of all forms of powered transportation. The London Underground can now be seen quite calm. People are driving fewer automobiles and purchasing fewer cars than they used to.

However, people are not afraid of diseases anymore. They merely don’t use buses, trains, or other modes of public transport. Instead, they prefer cycles. For many people, working from home has become a permanent arrangement.

Weekday travel is down to more than weekend travel, implying that individuals are more hesitant to go to work than to shop or party, which is surprising. Traveling at rush hour has decreased the most.

Peak-time railway ticket sales between October and December 2021 (when some limitations were in place) were barely 70% of pre-pandemic levels, according to the Office of Road and Rail. Off-peak ticket sales sold 18% less than usual. While advanced tickets, usually purchased by tourists, sold almost as much as before.

The metro and bus operators are trimming their timetables. Transport Scotland’s plan to double the number of tracks in East Kilbride is in the bin. Many trains and buses are plying less due to less demand, and reduced revenue causes layoffs within the industry.

In London Travelwatch’s survey, more than 64% of the participants said they would stop using the metro if services weren’t frequent. If fewer people take the metro because of infrequent trains, it will lead to more job cuts. Many worry this can lead to union strikes.

Though the Elizabeth Line was an incredible achievement that necessitated Britain’s greatest archeological dig, it seems like a relatively easy task compared to maintaining a functional public transport system in the coming years.